Using Religion as a Cover for Bigotry 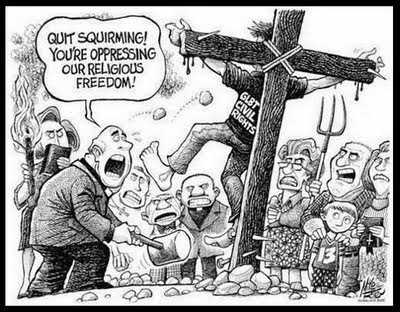 UPDATED: From RTV-6 in Indianapolis:

Angie's List and Salesforce have already announced plans to reduce their investment in Indiana over the law.

The letter ends by asking lawmakers to immediately enact new legislation that "makes it clear that neither the Religious Freedom Restoration Act nor any other Indiana law can be used to justify discrimination based upon sexual orientation or gender identity."

I don't want to beat a dead horse, but Indiana's heinous Religious Freedom Restoration Act is very dangerous because of the precedent it will set.  Despite claims by supporters of discrimination that it is little different than existing laws including a federal law signed in 1993, Indiana's law is sharply different.  Moreover, if it is not reversed, it will set the blue print for other laws that will expose gays, blacks, Muslims and others for open discrimination nicely wrapped it claims of "religious belief."  The New York Times takes the Indiana law to task in a main editorial.  Here are excerpts:

Gov. Mike Pence of Indiana, who last week signed a religious-freedom law driven by bigotry against gays and lesbians, has been complaining that the law’s opponents — which include top business leaders and civil-rights groups — are spreading “misinformation.”

It is true that the law does not, as some opponents claim, specifically permit businesses to refuse to serve gays and lesbians. Its drafters were too smart to make that explicit. Instead, the law allows individuals or corporations facing discrimination lawsuits to claim that serving gays and lesbians “substantially” burdens their religious freedom.

But nobody is fooled as to the law’s underlying purpose. As its most prominent backers have said quite clearly, it is meant to protect “Christian businesses and churches from those supporting homosexual marriages.” In other words, it should allow them to refuse service to gay couples.

The law has understandably spawned a nationwide call for boycotts of the state, not to mention the rebuke of the Indiana Chamber of Commerce, companies like Apple, and the N.C.A.A., whose college basketball tournament is holding the Final Four in Indianapolis this coming weekend.

Religious-freedom laws, which were originally intended to protect religious minorities from burdensome laws or regulations, have become increasingly invoked by conservative Christian groups as gay rights in general — and marriage equality in particular — found greater acceptance nationally. Besides Indiana, 19 states have adopted such laws, but the laws in the other states apply to disputes between individuals and the government; Indiana’s law also applies to disputes between private citizens.

If Mr. Pence is genuinely concerned about why people may be misunderstanding the law, he could start by looking in the mirror. Under persistent questioning on ABC News’s “This Week” on Sunday morning, Mr. Pence insisted that the law “is not about discrimination,” but about “empowering people.”

That claim is impossible to square with his refusal to consider a statewide law protecting gays and lesbians from discrimination (about a dozen Indiana cities, including most of the largest ones, already have such laws).

The freedom to exercise one’s religion is not under assault in Indiana, or anywhere else in the country. . . . . religion should not be allowed to serve as a cover for discrimination in the public sphere. In the past, racial discrimination was also justified by religious beliefs, yet businesses may not refuse service to customers because of their race. Such behavior should be no more tolerable when it is based on sexual orientation.