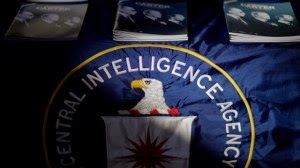 I have long advocated that George W. Bush, Dick Cheney and their minions and sycophants who authorized the use of torture in the so-called war on terror and in Afghanistan and Iraq need to be put on trial for war crimes.  In my view, one of the biggest indictments against Barack Obama is that he allowed murderous monsters escape justice and by doing so he made every American complicit to one extent or another in these war crimes.  Had the proper prosecutions been undertaken, we would not be hearing pontification from Cheney since at best he'd be in prison and at worst (at least from his perspective, not mine) he'd be in his grave after execution.  These things DO MATTER and one need look no farther than Vladimir Putin pointing at American wrong doing as justification for his own heinous deeds.  The main editorial in the New York Times looks at the CIA's efforts to cover up war crimes activities of its own.  People need to be fired and prosecuted.  Will Obama and the Justice Department have the spine to do so?   Here are editorial excerpts:

It was outrageous enough when two successive presidents papered over the Central Intelligence Agency’s history of illegal detention, rendition, torture and fruitless harsh interrogation of terrorism suspects. Now the leader of the Senate intelligence committee, Dianne Feinstein, has provided stark and convincing evidence that the C.I.A. may have committed crimes to prevent the exposure of interrogations that she said were “far different and far more harsh” than anything the agency had described to Congress.

Ms. Feinstein delivered an extraordinary speech on the Senate floor on Tuesday in which she said the C.I.A. improperly searched the computers used by committee staff members who were investigating the interrogation program as recently as January.

Beyond the power of her office and long experience, Ms. Feinstein’s accusations carry an additional weight and credibility because she has been a reliable supporter of the intelligence agencies and their expanded powers since the attacks of Sept. 11, 2001 (sometimes too reliable).

On Tuesday, the C.I.A. director, John Brennan, denied hacking into the committee’s computers. But Ms. Feinstein said that in January, Mr. Brennan acknowledged that the agency had conducted a “search” of the computers. She said the C.I.A.’s inspector general had referred the matter to the Justice Department for possible criminal prosecution. “Besides the constitutional implications,” of separation of powers, she said, “the C.I.A.’s search may also have violated the Fourth Amendment, the Computer Fraud and Abuse Act, as well as Executive Order 12333, which prohibits the C.I.A. from conducting domestic searches or surveillance.”

Ms. Feinstein said that when Senate staff members reviewed thousands of documents describing those interrogations in 2009, they found that the C.I.A.’s leadership seriously misled the committee when it described the interrogations program to the panel in 2006, “only hours before President Bush disclosed the program to the public.”

The interrogations included a variety of brutal methods, some of which — waterboarding in particular — were unequivocally torture.

She dismissed the acting C.I.A. general counsel’s claim that the Senate staffers had hacked agency computers as intimidation. The counsel, she noted, was a lawyer and then chief lawyer for the interrogations division and is “mentioned by name more than 1,600 times in our study.”

The Justice Department now has a criminal investigation to conduct, but the C.I.A. internal review and the Senate report must be released. Ms. Feinstein called on President Obama to make public the Senate report, which he has supported doing in the past. She said that this would “ensure that an un-American, brutal program of detention and interrogation will never again be considered or permitted.”

The lingering fog about the C.I.A. detentions is a result of Mr. Obama’s decision when he took office to conduct no investigation of them. We can only hope he knows that when he has lost Dianne Feinstein, he has no choice but to act in favor of disclosure and accountability.

Much of what was done is akin to what Hitler's Nazi regime did - and people were tried, sentenced and in some cases executed for what they did.  The standard now should be no different.
Posted by Michael-in-Norfolk at Tuesday, March 11, 2014