Senate Reaches Possible Deal To Restore The Jobless Benefits - Will the GOP House Kill it? 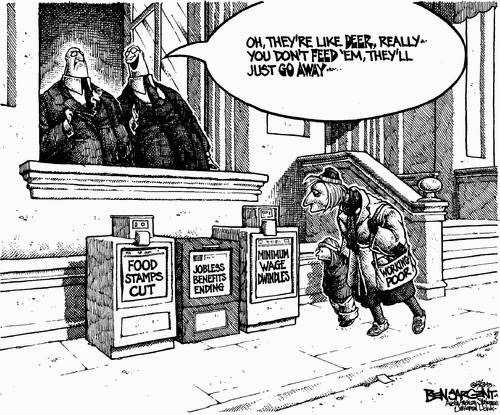 This blog looks at hypocrisy on many fronts.  Outside of religious institutions and misnamed "family values" groups, few organizations provides more examples of hypocrisy than the Republican Party which claims to embrace Christian values even as it presses policies that are the antithesis of the Gospel message.  Nowhere is this hypocrisy more egregious than  the GOP's treatment of the poor and the unemployed who are viewed as disposable garbage even as the GOP and its"godly folk" supporters congratulate themselves on their feigned piety.  Now, the U.S. Senate has structured a compromise that would restore unemployment benefits to millions of the long term uninsured who were kicked off of benefit back around the Christnas holiday.  The question will now be whether or not the GOP controlled House of Representatives kills the effort.  Here are highlights from Think Progress:

After yanking the safety net out from underneath two million Americans in December, Congress may finally be ready to restore jobless benefits for the long-term unemployed. At least, for a few months, if the Republican-controlled House will agree to take up a long-awaited Senate compromise.

A group of senators reportedly agreed to a compromise that would reinstate the federal emergency unemployment compensation (EUC) program on Thursday afternoon. The deal would apply retroactively, meaning that the two million job-seekers who have gone without EUC checks since Congress let the program expire on December 28 would see back payments from the program. But, going forward, the agreement only extends the program by five months, meaning that it would lapse all over again in late May without a more permanent fix.

The EUC program, which serves those who have exhausted state-level jobless benefits but are still looking for work, was a casualty of Congress’ determination to reduce deficit. Even though conservatives in Congress have a long history of supporting the EUC program, they blocked an extension of it this time around by insisting that it be paid for through spending cuts elsewhere.

Lawmakers couldn’t agree on a method to pay for the program — which, like other safety net programs, actually saves the economy money on the whole by boosting the consumer spending that fuels job creation — and the program was left to expire.

At the time, 1.3 million people relied on those benefits. As the weeks passed and more job-seekers exhausted state aid, that number has climbed up over 2 million. A cumulative 2.3 million children live with unemployed parents who saw their federal benefits cut off.

Thursday’s deal shows that Congress’s obsession with deficit reduction hasn’t changed. The Senate deal pays for its brief EUC extension by allowing companies to continue under-paying into their pension funds, as well as extending some customs fees that were set to expire, according to a National Journal report on the compromise.

As Senators left the jobless without benefits over the last 10 weeks, the Congressional Budget Office reported that Washington had already slayed its deficit dragons; the nonpartisan agency now projects a budget deficit of just 3 percent of GDP this year and 2.6 percent of GDP next year.

In the meantime, the loss of federal benefits sucked billions of dollars out of state economies, which made the road back to gainful employment even longer for the long-term jobless.