The True Ugliness and Danger Posed by Far Right Christians 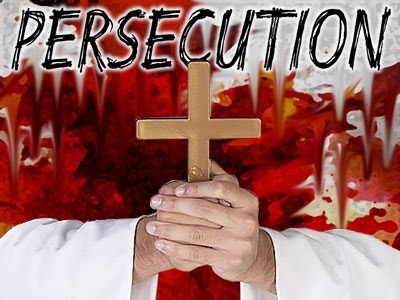 Matt Barber is a dean at Liberty University's law school in Lynchburg, Virginia - an institution of alleged higher education which receives large amounts of federal scholarship dollars.  Yet the insanity and religious based hatred that is insanity that is disseminated by and from Liberty University is off the charts.  Indeed, Liberty Council in which law school dean Mat Staver and Matt Barber are involved was recently designated by the Southern Poverty Law Center as a hate group. And thanks to a rant on Matt Barber's blog, if there was any doubt that the hate group designation was warranted, that doubt has been dispelled.  Not only is Barber (as is Staver) vitriolic in his hatred of gays, but the man is horrifically anti-Muslim and it is rants like his - which repeats the myth that Christians are persecuted - that encourage violence against other citizens.  Here is a sampling of the venom that Barber and his blog are peddling:

How then is it that the world despises Christians, as well as Jews, above all others?  It is because of the eternal enmity chosen long ago by Satan when he decided in delusion that he could be equal in power to his Maker, and in rebellion was forever cast out of heaven—along with his fellow angel followers—and given temporary authority over the world.  In the Garden of Eden, Satan talked Adam and Eve into that same rebellion against the Lord.  The world has been under the curse of sin and death ever since.

From the beginning of time, Satan and the other fallen angels (demons) have made war against the Lord and His creation.  It is their sole mission to steal, kill and destroy what God has made and to keep as many people as possible from the knowledge of salvation through Jesus.  In this mission, they have heaped deception upon deception for mankind.  They have created countless false doctrines and distractions to mislead and deceive people into taking the path to Hell.  The world’s false religions—all those whose foundation is not solely the Gospel of Christ—lead to one place:  eternal damnation and separation from God.  This includes false, so-called “Christian” religions that deny Christ as the only Way to salvation, and instead, rely on traditions of men and on works to “earn” salvation, something we could never earn.

The frenzied, irrational hatred people of the world have for Christians is inspired by, and based in, Satan’s hatred for God and His people.  It’s a demonic hatred found in people who have rejected the Lord.  Have you ever noticed that there is not the same deep hatred for non-Christians and non-Christian religions?  Satan doesn’t hate his own work; he aggressively promotes and supports it.  Supernatural hatred for Christians and Jews exists because they are God’s people, the real deal, chosen by Him from the foundation of the world to be miraculously reconciled to Him.  We simply remind Satan of his eternal defeat and the fact that his time as “the god of this world” is short and growing to a close.  He is furious in his great loss.

What about Islam, the second largest religion in the world?  The roots of who would later become the Arab Muslim people go back to Abraham and Ishmael, his son from the Egyptian woman Hagar, the son Abraham had as a result of his brief unbelief in God’s ability to give him a son through his elderly wife Sarah.

Islam is a demonic, militant-political-religious ideology born of the children of Ishmael, and like them, it has greatly proliferated.  It is one of Satan’s premiere deceptions, tyrannically ensnaring countless millions of people.  And to this day, the word of the angel of the Lord to Hagar concerning Ishmael stands true:

Those who adhere to Islam naturally have a demonically-inspired hatred for the people of the Lord, but as the Bible says, they hate everyone.  However, it is with the deepest of hatreds that they regard Christians and Jews, because their hatred is Satan’s hatred, and it goes well beyond simple dislike or disagreement on principles.  It goes to the heart of the spiritual essence of the foundational struggle, to the basic forces of darkness and light.

If anyone displays "frenzied, irrational hatred" it is the "godly folks."  Note how early on the rant relies on the now disproved myth that Adam and Eve existed as historical persons.   One has to wonder how someone can be so psychologically weak - or more appropriately, mentally disturbed - as to believe this crap.  These people are dangerous and their main stock in trade is hate and bigotry.  They do not deserve a voice in the public square.  With this kind of mindset it is little wonder that religion has caused countless wars and resulted in the deaths of millions over the last two millennium.
Posted by Michael-in-Norfolk at Wednesday, March 12, 2014

I think he got a dig in at Catholics, too: "rely on traditions of men". I know of no denomination that relies so much on man-made constructs as the Catholic Church. I'm sure you could write a post about all of those, and how they also demonize others that "believe differently" from them. I can name at least one:
My Believer's Baptism, done at an early, but aware age, as my personal acceptance of Jesus Christ as my Savior, in the way depicted in the Gospels, particularly when John the Baptist baptizes Jesus himself. To the Catholics, this isn't enough for them. Apparently the ten or so years of sinning before that aren't covered since I wasn't dunked, or sprinkled or whatever it is they do to babies who have somehow "inherited" sin from somewhere. Therefore, I am not allowed to take Communion in their church. God, this pisses me off!

Oh, and so do the weirdos at Liberty. My worst problem with them is that I have some very good, very close friends who are graduates of Liberty, and they are nothing like this. Perhaps their hatred doesn't completely permeate the lower levels of learning there!