Quote of the Day: Sarah Palin and the Swamp Fever of the GOP 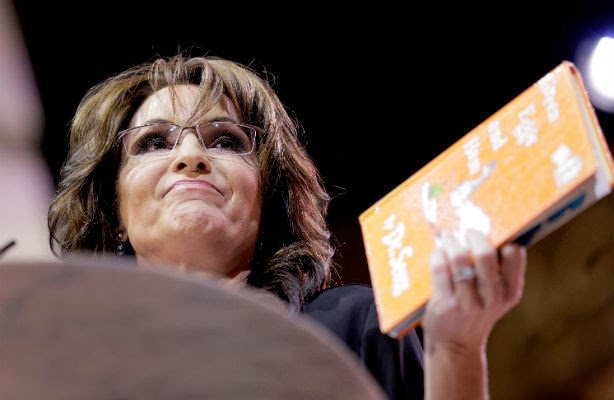 Few individuals can so thoroughly sum up what is wrong with today's GOP by their mere presence than Sarah Palin.  The woman, in view, belongs in a mental ward, and as long as individuals like Palin are not only welcome but held in high esteem by the Republican party base, the GOP will remain a party that rational, decent people should want to avoid like the plague.  I suspect that for many, Palin's rise in the GOP has been the straw that broke the camel's back and made exiting the GOP appear to be the only sane approach.  Palin and much of the base of today's GOP base are extremely dangerous because they are too stupid to recognize their own idiocy. A column in Esquire by Charles Pierce looks at Palin's lunacy and the sickness of the GOP.  Here are excerpts:

By now, and by god, it should have settled permanently in the consciousness of the nation what a huge and untoward gamble with the country John McCain and his campaign took in 2008 when they elevated Sarah Palin from her rightful place on the tundra to the political celebrity she currently enjoys. McCain should pay a heavy price for unleashing this ignorant, two-wheeled bilewagon on the country's politics. If you think she's a legitimate political leader, you're an idiot and a sucker and I feel sorry for you.

Yesterday she gave a wildly received speech to ring down the curtain at CPAC. The applause, as far as I know, may still be going on. It was as singularly embarrassing a public address as any allegedly sentient primate ever has delivered. It was a disgrace to politics, to rhetoric, to the English language, and to seventh-grade slam books everywhere.

[W]ith Palin, and watching the hysterical reception her puerile screed received, there is something more serious going on. She is the living representation of the infantilization of American politics, a poisonous Grimm Sister telling toxic fairy tales to audiences drunk on fear, and hate and nonsense. She respects no standards but her own. She is in perpetual tantrum, railing against her betters, which is practically everyone, and volunteering for the job of avatar to the country's reckless vandal of a political Id. It was the address of a malignant child delivered to an audience of malignant children. If you applauded, you're an idiot and I feel sorry for you.

Email ThisBlogThis!Share to TwitterShare to FacebookShare to Pinterest
Labels: CPAC, future of the country, future of the GOP, GOP Base, GOP Demagogues, insane, Sarah Palin