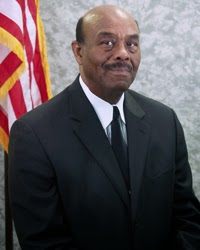 As readers may recall, former Hampton Mayor Molly Ward signed the Mayors for Freedom to Marry Resolution back in 2010.  At the time, Ward was only one of three Virginia mayors to have signed the resolution - the others were the mayors of Charlottesville and Alexandria were the others.  Subsequently, Ward resigned as mayor and took a position in the Obama White House before being tapped for a position in Virginia Governor Terry McAuliffe's administration.  In the interim, the number of Virginia mayors signing onto the resolution has climbed to eleven mayors.  Now, it just moved up to twelve mayors.  Hampton's new mayor, George Wallace (pictured at left), has signed the resolution after my partner and I asked him to do so and provided him with information.  Other recent cities joining the list are Lexington, Norfolk, Capron, Petersburg, Ashland, Blacksburg, and Fairfax. It goes without saying that Victori Cobb and her fellow Christofascists at The Family Foundation are likely not too happy that the tide is shifting against them..  Here is the text of the resolution:

As mayors of great American cities, we proudly stand together in support of the freedom of same-sex couples to marry. We personally know many gay and lesbian people living in our cities who are in committed, loving relationships, who are active participants in the civic life of our communities, and who deserve to be able to marry the person with whom they share their life.

We are proud that at its 2009 annual meeting, the U.S. Conference of Mayors unanimously approved a resolution stating that: “The U.S. Conference of Mayors supports marriage equality for same-sex couples, and the recognition and extension of full equal rights to such unions, including family and medical leave, tax equity, and insurance and retirement benefits, and opposes the enshrinement of discrimination in the federal or state constitutions.”

Our cities derive great strength from their diversity, and gay and lesbian families are a crucial part. Studies have shown what we know through our hands-on experience—that cities that celebrate and cultivate diversity are the places where creativity and ideas thrive. They are the places where today’s entrepreneurs are most likely to choose to build the businesses of tomorrow. Allowing same-sex couples the right to marry enhances our ability to build this kind of environment, which is good for all of us.

We stand for the freedom to marry because it enhances the economic competitiveness of our communities, improves the lives of families that call our cities home, and is simply the right thing to do.  We look forward to working to build an America where all people can share in the love and commitment of marriage with the person with whom they share their life.

A glaring absence? Richmond mayor Dwight Jones who wants to be chair of the Democratic Party of Virginia.