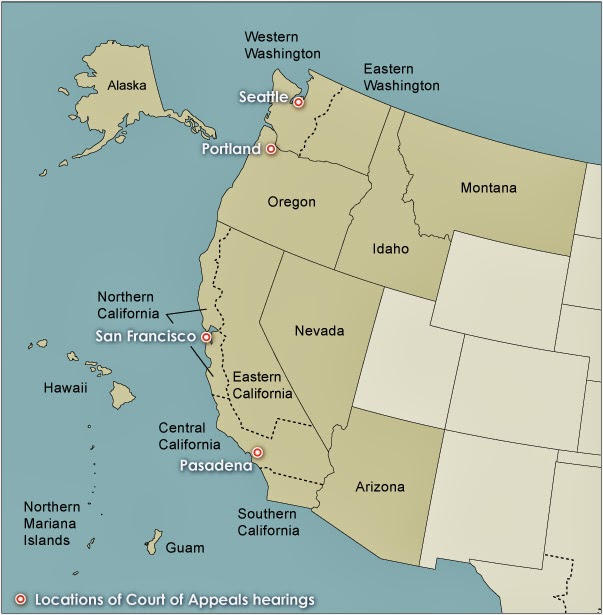 It what could spell the death knell for many anti-gay laws in nine western states, the ruling in SmithKline Beechum Corp. v. Abbott Laboratories will not be appealed which means that the Ninth Circuit ruling applying heightened scrutiny to laws targeting gays will be the new applicable standard.  The case has already had a big impact in the form of the State of Nevada's decision not t o defend that state's anti-gay marriage amendment.   Hopefully, there will now be a domino effect throughout the rest of the Ninth Circuit states shown in the map above.   Indeed, any attorney general in those states who now argues against such amendments based on the rejected arguments used in Virginia and elsewhere at the District Court level would be technically guilty of an ethical violation.  This is a huge development.  Imagine same sex marriage coming to Idaho, Montana, Arizona and Alaska sooner rather than later. Here are some highlights from and HRC release:

In January, the U.S. Court of Appeals for the Ninth Circuit ruled in a pharmaceutical contract dispute, *Abbott Laboratories v. SmithKline Beecham,* that it violates the U.S. Constitution's guarantee of equal protection to exclude someone from jury service because of his or her sexual orientation. In doing so, the court also concluded that discrimination based on sexual orientation should be subject to heightened scrutiny, a higher standard of judicial review that requires a stronger justification for laws and policies that treat gays and lesbians differently. Only days after the Ninth Circuit's decision, the Attorney General of Nevada ended the state's defense of its marriage ban in another case before that court, concluding that Nevada's justifications for excluding same-sex couples from marriage could not withstand that higher level of review.

"AbbVie's decision not to appeal this ruling may turn out to be a pivotal moment in the quest for marriage equality in every state in this country and greater constitutional protections for all LGBT Americans," said HRC President Chad Griffin. "We thank the company for standing on the right side of history."

BuzzFeed has an article that looks at some of the implications.  Here are excerpts:

The major victory for LGBT advocates announced by the Human Rights Campaign actually played out in a dispute between two pharmaceutical companies, SmithKline Beecham and Abbott Laboratories, and involved whether gay people could be kept off a jury in a trial involving HIV drugs.

The 9th Circuit Court of Appeals — whose decisions apply to all federal courts in Alaska, Arizona, California, Hawaii, Idaho, Montana, Nevada, Oregon, and Washington — said no. In doing so, however, Judge Stephen Reinhardt wrote a decision that could have wide-ranging and long-lasting effects on LGBT rights more broadly — from marriage to employment and beyond.

While most laws that create groups or classifications must merely show there is a rational basis, or a legitimate reason, for the law, laws subjected to heightened scrutiny — under the Equal Protection Clause of the 14th Amendment to the U.S. Constitution (and applied to the federal government through the 5th Amendment) — must show more. Some, like those that classify based on race, must show a compelling state interest for classifying people, while others, like those based on sex, must show an important state interest in doing so.

Even before the question of whether Abbott would seek further review of the January decision was resolved, the decision started to have ripple effects. On Feb. 10, Nevada Attorney General Catherine Cortez Masto announced that she and her client, Gov. Brian Sandoval, would no longer be defending Nevada’s amendment banning same-sex couples from marrying on appeal in the 9th Circuit — in large part based on the fact that they did not believe their appeal would succeed if the amendment had to withstand heightened scrutiny.

Here in Virginia, the ruling in SmithKline played a role in Attorney General Mark Herring's decision not to defend Virginia's anti-gay Marshall-Newman Amendment.  With Bostic v. Rainey on appeal to the 4th Circuit, hopefully that Court of Appeal will be influenced by the 9th Circuit's ruling.
Posted by Michael-in-Norfolk at Sunday, March 09, 2014