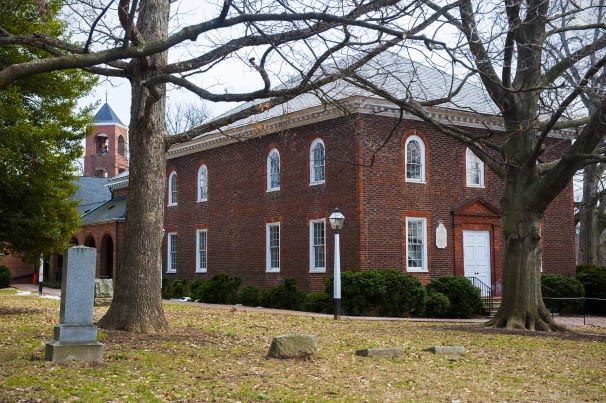 It appears that the saga of Falls Church Anglican, a former Episcopal Church parish they split from that denomination over the the ordination of Bishop Gene Robinson and which tried to steal the parish property from the denomination, seems to be finally over.  And the result is that the Episcopal diocese owns the property, not the anti-gay break away parish which all too typically used "sincerely held religious belief" to cloak animus and bigotry.  Six other Northern Virginia parish likewise saw their parish properties revert back to the diocese.  One of the ironies of the saga was that the break away parishes had tried to utilize an 1860's Virginia statute which had been enacted to allow break away Baptist parishes that supported slavery to steal their respective properties from the national church during the Civil War era.  The Washington Post has coverage.  Here are highlights:

Seven years after 15 conservative Virginia congregations made global news by breaking away from the Episcopal Church — and refusing to give up tens of millions of dollars in property — the Supreme Court on Monday ended the complex legal dispute by declining to take up an appeal by the last remaining plaintiff.

The Falls Church Anglican, a 2,000-member breakaway congregation, had asserted that the nearly 300-year-old sprawling property belonged to the Anglican group because the Episcopal Church “left” its umbrella Anglican tradition by becoming more liberal in interpreting scripture and ordaining gay and lesbian clergy.

For the breakaway Anglicans, that means eventually moving their huge congregation from a large high school gym and several other borrowed locations to a property of their own — once they find one. For the Episcopal congregation that remains, it means trying to grow its 200-person community into one worthy of the large and valuable property it now gets to keep.

The splits, which happened in late 2006 and early 2007, in some cases divided families and longtime friends who disagreed in particular about the Episcopal Church ordaining openly gay Bishop Gene Robinson of New Hampshire. Both sides at times described the conflict as embarrassing — to see churches spending so much money on lawyers instead of on the needy.

The cases drew global attention for a few reasons. One issue was the size and wealth of some of the breakaway congregations. The multiple properties sit on a 30-acre compound and are valued at about $40 million. The conservatives decided to place themselves instead under the leadership of a controversial anti-gay Nigerian Anglican archbishop.

In 2012, the Virginia Supreme Court ordered the breakaways to turn over the properties, including the money, to the diocese. Eventually, only the large Falls Church remained in court, meeting in alternative spaces as the case continiued.

On Monday, both sides said it was unfortunate to spend so many millions on legal bills but seemed to think it was worth it.

Personally, I would be embarrassed to be walking in the tracks of pro-slavery forces and pro-segregationists, but some of the "godly folk" just cannot feel good about themselves unless they are condemning others.  WWJD??
Posted by Michael-in-Norfolk at Tuesday, March 11, 2014