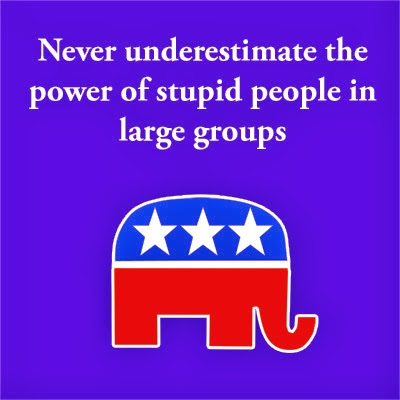 More or less when I was exiting from the Republican Party I saw some of the early waves of the Christofascists beginning to over run the Republican Party of Virginia.  As these lunatic elements were elected to local committees, many moderates left in disgust as the GOP became a sectarian party for all practical purposes.  Things have only gotten worse as many of  the Christofascists have repackaged themselves under the Tea Party label.  Regardless of which label they use for themselves, these people are extremists who look to subvert the separation of church and state and who long for the days of the Jim Crow laws and when gays were closeted and largely invisible.  With the changing demographics of the country, if the GOP continues to go down this course it will become a permanent minority party.  Some in the so-called GOP establishment realize this even as they continue to prostitute themselves to these ignorance embracing extremists.  With the 2014 mid-term elections approaching, the establishment seeks to crush the insurgent forces of the Christofascists/Tea Party.  The New York Times looks at the effort.  Here are highlights:

As conservative activist groups stirred up trouble for establishment Republican Senate candidates in 2010 and 2012, party leaders in Washington first tried to ignore the insurgents, then tried to reason with them, and ultimately left it to primary voters to settle the matter.


But after several of those conservatives — in Nevada, Colorado and Delaware in 2010 and in Indiana and Missouri in 2012 — managed to win their primaries but lose in the general election, party leaders felt stung by what they saw as avoidable defeats.

This election season, Republicans led by Senator Mitch McConnell of Kentucky are taking a much harder line as they sense the majority within reach. Top congressional Republicans and their allies are challenging the advocacy groups head on in an aggressive effort to undermine their credibility. The goal is to deny them any Senate primary victories, cut into their fund-raising and diminish them as a future force in Republican politics.

“I think we are going to crush them everywhere,” Mr. McConnell, the Senate Republican leader, said in an interview, referring to the network of activist organizations working against him and two Republican incumbents in Kansas and Mississippi while engaging in a handful of other contests. “I don’t think they are going to have a single nominee anywhere in the country.”

Elevating the nasty intramural brawl to a new level, Mr. McConnell on Friday began airing a radio ad in Kentucky that attacked both Matt Bevin, the businessman challenging him in the Republican primary, and the Senate Conservatives Fund, one of the groups trying to oust Mr. McConnell and a political action committee that has been a particular thorn in his side.

The escalating tension between party leaders and Tea Party-aligned activists in groups like the Senate Conservatives Fund, the Madison Project and FreedomWorks arises from the activists’ view that some top elected Republicans are major obstacles to enacting conservative policies and need to be replaced.

The conservative activists say they are dedicated to deposing the lawmakers at the risk of losing seats.

“I know this: Politics doesn’t like losers,” said Mr. McConnell, who suggested that a high-profile series of defeats would deflate the groups. “If you don’t have anything to point to, it is kind of hard to keep it going.”

Even if they are shut out in attempts to oust incumbents, leaders of these organizations do not show signs of quitting. They say they are in the early stages of a long-term effort to build a movement, no matter what their scorecard looks like after the primaries and the general election. And they have not given up on this year yet.

“It is game on,” said Matt Kibbe, the head of FreedomWorks. “I think we are going to win one of these races.”

The GOP brought this problem on itself by initially welcome in these extremist elements, especially when George W. Bush and Karl Rove used anti-gay amendments in many states to mobilize the Christofascists and those who now wave the Tea Party banner.  And John McCain made things worse when he picked Sarah Palin - an utter lunatic in my view - for his VP running mate.  For many in the GOP, including my late mother, Palin's selection was the last straw. These elements should never have been given any legitimacy and the Frankenstein monster is going to be very hard to kill.