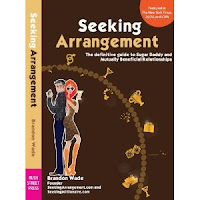 Given that the GOP cares nothing about the terrible economy, the unemployed and under employed and is happy to gut college loan assistance programs while giving tax breaks to the very wealthy, a development scrutinized in a Huffington Post piece might well be the new unofficial GOP program to pay one's way through college when all else fails: become a sex worker and exchange sex for assistance from "Sugar Daddies" or "Sugar Mommies" as a means of paying down often staggering college loans (law students may be even more in need of this approach given the bleak market in the legal profession). The piece looks at a website called SeekingArrangement.com where students can look for those willing to pay for their college. While depicting itself as a "dating site," as the Huffington Post piece makes clear, sex is what's really for sale. And SeekingArrangement.com is only one of such sites. And the students in search of financial assistance are both gay and straight. Here are some highlights:
*
Saddled with piles of student debt and a job-scarce, lackluster economy, current college students and recent graduates are selling themselves to pursue a diploma or pay down their loans. An increasing number, according to the the owners of websites that broker such hook-ups, have taken to the web in search of online suitors or wealthy benefactors who, in exchange for sex, companionship, or both, might help with the bills.
*
The past few years have taken an especially brutal toll on the plans and expectations of 20-somethings. As unemployment rates tick steadily higher, starting salaries have plummeted. Meanwhile, according to Jeffrey Jensen Arnett, a professor of psychology at Clark University, about 85 percent of the class of 2011 will likely move back in with their parents during some period of their post-college years, compared with 40 percent a decade ago.
*
Enter the sugar daddy, sugar baby phenomenon. This particular dynamic preceded the economic meltdown, of course. Rich guys well past their prime have been plunking down money for thousands of years in search of a tryst or something more with women half their age -- and women, willingly or not, have made themselves available. With the whole process going digital, women passing through a system of higher education that fosters indebtedness are using the anonymity of the web to sell their wares and pay down their college loans.
*
"Over the past few years, the number of college students using our site has exploded," says Brandon Wade, the 41-year-old founder of Seeking Arrangement. Of the site's approximately 800,000 members, Wade estimates that 35 percent are students. "College students are one of the biggest segments of our sugar babies and the numbers are growing all the time."
*
Wade sees his company as providing a unique service, a chance for "men and women living through tough economic times to afford college." He bristles at the notion that he's merely running a thinly veiled, digital bordello, choosing instead to describe his site as one that facilitates "mutually beneficial relationships."
*
At The Huffington Post's request, Seeking Arrangement listed the top 20 universities attended by sugar babies on the site. They compiled the list according to the number of sugar babies who registered using their .edu email addresses or listed schools' names on their profiles. New York University tops the list with 498 sugar babies, while UCLA comes in at No. 8 with 253, and Harvard University ranks at No. 9 with 231. The University of California at Berkeley ranks at No. 13 with 193, the University of Southern California ranks at No. 15 with 183, and Tulane University ranks at No. 20 with 163 college sugar babies.
*
When Barb Brents, a professor of sociology at the University of Nevada, Las Vegas, conducts research in various legal brothels in the state, she finds women hailing from a variety of different backgrounds. . . . . Brents equated modern-day college students seeking online sugar daddies to a phenomenon among young, working women nearly a century ago. During the 1910s and 1920s, some young women who worked at minimum-wage jobs during the day would supplement their meager paychecks by meeting up with male suitors at night. They'd swap companionship and sex in exchange for either a clothing allowance or rent money. Such women, explains Brents, never referred to themselves as prostitutes.
*
There's more to the article. Frankly, it's a very sad state of affairs but I guess somewhat understandable given the current economy and the unwillingness of the GOP to assign any value to the lives/prospects of ordinary citizens. The ultimate irony, of course, is that the Christianists and evangelicals of the Tea Party are the ones helping to create the circumstances where a site like Seeking Arrangement.com can flourish. WWJD??
Posted by Michael-in-Norfolk at Monday, August 01, 2011

I thought this might be happening. When I used to be promiscuous person a couple months ago, I used craigslist as a way to hook up and I saw many ads from college students searching for guys who are "generous".