Is the GOP's Plan to Destroy the Economy to Defeat Obama Working? 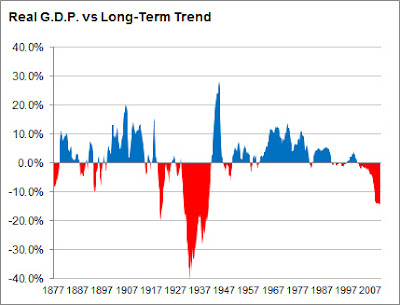 Today's blood bath on Wall Street has left me feeling physically sick - I've likely lost a big chunk of my inheritance from my late mother However, I'm even sicker knowing that the plunge in the Dow was likely part of a cynical calculation by the GOP. Yes, part of the plummet in the Dow relates to events in Europe, but a good portion relates to the bleak economic reality here in the USA. The debt ceiling deal will result in federal spending cuts that will compound on top of the severe cuts already made in the states - all of which will further depress consumer spending. Remember, John Boehner has boasted that he got "98% of what he wanted." What he wanted - not what was good for the country.

The chart above makes it clear just how depressed the economy is at this point - clearly we are in the worse economic down turn during the last 130 years save and except the Great Depression. And now, we are about to experience a reprise of FDR's mistake in 1937 which caused a second down turn. A down turn that was only over come by the vast spending associated with World War II.

It is truly disturbing that the GOP, in my opinion, is willing to sacrifice the nation's economy and the lives and finances of millions of Americans all so that they can attempt to guarantee that Barack Obama is a one term president. Politico has a long article that looks at the likelihood that Obama may not be re-elected in 2012. The thought of another far right GOP president is scary. But that's the GOP's goal and sadly Obama has played into his enemies' hands. Here are highlights (read the whole article):

The politics of the debt fight were a drag for President Barack Obama, yanking his popularity to new lows. Here’s an even bigger drag: Obama emerges from the months-long fracas weaker — and facing much deeper and more durable political obstacles — than his own advisers ever imagined.

The consensus has been that for all his problems, Obama is so skilled a politician — and the eventual GOP nominee so flawed or hapless — that he’d most likely be reelected. Don’t buy into it. This breezy certitude fails to reckon with how weak his fundamentals are a year out from the general election. Gallup pegs his approval rating at a discouraging 42 percent, with his standing among independents falling 9 points in four weeks.

His economic stats are even worse. The nation has 2.5 million fewer jobs today than the day Obama took office, a fact you’re sure to hear the Republicans repeat. Consumer confidence is scraping levels not seen since March 2009.

Where’s the bright spot? Hard to see. Obama has few, if any, domestic achievements that enjoy broad public support. No one assumes employment, growth or housing prices to pick up much, if at all — something Obama is essentially powerless to change. And the political environment and electoral map are significantly tougher than in 2008, especially in true up-for-grabs states.

The White House anticipates unemployment at 8.25 percent, and Goldman Sachs and others warn the number could be higher — close to 9 percent, which would mean no net job growth after the biggest stimulus package in the history of the world. No president has won reelection when unemployment was higher than 7.2 percent in 50 years.

Median home values have declined every month Obama has been in office, too, according to Zillow, which monitors real estate markets. The site’s chief economist now predicts home value won’t bottom out until 2012 “or later.” So, the one asset Americans relied on for wealth — and until the crash, for spending money — will be the biggest concern for many.

“The big issue for him will be whether people see light at the end of the tunnel when they ultimately vote,” Democratic Washington Gov. Christine Gregoire said in a telephone interview. “The people in my state want to hear that there is a good and bright and sound future. The average person is really concerned.”

Clearly, the debt ceiling deal and the coming cuts to come in November or by auto-pilot if an agreement cannot be reached will likely only further depress the economy and Obama's reelection chances. Will voters be smart enough to track the real fault back to the GOP? Personally, I doubt it. Most voters are poorly informed and fall victim to political ad sound bites - and the GOP has shown itself far more adept at misleading sound bites which in turn are parroted by lazy "journalists" at the main stream media outlets.

Posted by Michael-in-Norfolk at Thursday, August 04, 2011