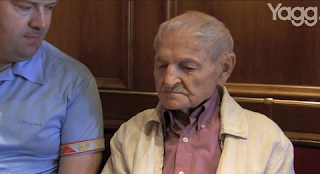 Bryan Fischer and the hate merchants at American Family Association rant a revisionist history that blames fascism on gays even as they themselves would likely like to force LGBT Americans into concentration camps. Meanwhile, for those living in the real world, a news report out of Europe indicates that the last known survivor of the Nazi "Pink Swastika" program that incarcerated gays in concentration camps has passed away at age 98. Here are some highlights of a translation of the French site AFP:

The last known survivor of the "pink triangles", deported by the Nazis because of their homosexuality, Rudolf Brazda, died Wednesday at 98 years, four months after being made a chevalier of the Legion of Honor in April. He co-authored with Jean-Luc Schwab "Itinerary of a Pink Triangle" recounting his 32 months in concentration camps, forced labor, death everywhere, beatings, harassment.

"In accordance with his will, his remains will be cremated and his ashes placed alongside those of his life partner of more than 50 years, Edward Mayer, who died in 2003 in Mulhouse," add friends. Rudolf Brazda had been part of some 10,000 deportees under Hitler because of their sexual orientation, the Nazis considering homosexuality as a threat to the perpetuation of the race.

In 1937, he was sentenced to six months in prison for "debauchery of men", then deported to Czechoslovakia. There, after the annexation of the Sudetenland by Hitler, he was again tried and convicted for similar facts, this time to 14 months in prison. This time served, Rudolf, considered a repeat offender, was interned in the concentration camp of Buchenwald in central Germany. He survived 32 months of hell in this camp, thanks to his friendship with a kapo communist and "a little luckier than others."

The drama of the "pink triangles" remained unknown until, in the 1980s, a play, books and movies are starting to raise the issue. When, in May 2008, Germany formally inaugurated in the heart of Berlin, a monument to their memory, the organizers explain that this tragedy not count any witnesses alive. Only then Rudolf Brazda, who had lived in anonymity since 1945 near Mulhouse, decided to break the silence. A month later, he was the guest of honor at the "Gay Pride" in Berlin. Dressed in a pink shirt, he lays a flower at the foot of the new memorial, attended by the mayor of the capital Klaus Wowereit, also gay.

Stories like that of Brazda need to be known and widely circulated so that the hate merchants and religious extremist are recognized for the agents of evil that they represent.

Posted by Michael-in-Norfolk at Thursday, August 04, 2011