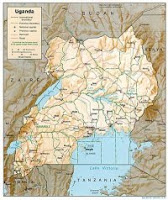 The Obama administration has taken a step that I applaud: those engaging in LGBT persecution overseas will be barred from entering the United States. Obviously, the bigger question is when will Obama call for action against those engaging in LGBT persecution within the United States and U.S. citizens and churches actively supporting LGBT persecution overseas? Obviously, this latter action would mean that Obama would have to advance measures that would punish his BFF Rick Warren - not to mention Warren's Christianist allies who have played a major role in fanning anti-LGBT hatred in Africa. Chris Johnson at the Washington Blade has a story on this latest action. Here are highlights:

President Obama issued a proclamation on Thursday that could prohibit those engaging in LGBT persecution overseas from entering the United States.

The proclamation bars entry of immigrant and non-immigrant aliens who organize or participate in war crimes or serious violations of human rights — which could include those seeking to pass legislation in Uganda that would institute the death penalty for homosexual acts.

Specific language in the proclamation explicitly states that those who persecute people based on their “sexual orientation and gender identity” are among the categories of those who won’t be able to enter the United States.

“The proclamation also bans admission to the United States for those who are complicit in organizing these abuses — not just those who carry them out,” a White House fact sheet states. “As such, it allows the United States to act before planned abuses and atrocities metastasize into actual ones.”

The proclamation gives the secretary of state, or the secretary’s designee, the authority to identify people who won’t be able to enter the United States based on this new guidance.

Mark Bromley, chair of the Council for Global Equality, said the order gives the Obama administration “an important tool to use in dissuading extremist actions that are prejudicial to basic human rights, and in encouraging the development of inclusive laws and societies.”

“The Council praises this move, which could in principle be used to justify the exclusion of hate-promoting politicians like Ugandan parliamentarian David Bahati, who introduced a ‘kill the gays bill’ in a previous legislative session in Uganda and may do so again,” Bromley said. “That bill, of course, would have carried dire consequences for LGBT individuals in Uganda.”

Obviously, American Christianists who have worked hand in glove with Bahati need to face consequences as well. One thought - don't allow them back in the USA and make them live in the Hell hole countries where they are spreading hate. And while at it, let's cut off the export of money to finance LGBT persecution.
Posted by Michael-in-Norfolk at Friday, August 05, 2011