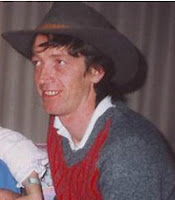 Even as the Vatican and disingenuous, corpulent bishops shed crocodile tears and make dishonest statements of remorse for the world wide conspiracy that aided and abetted priest who preyed on children and youths the deadly toll of the Church hierarchy's sins continues to become increasing visible. Both The Age and the Herald Sun are carrying stories that link at least 26 suicides to sexual abuse by Catholic clergy (Peter Curran, once such suicide victim is pictured at right). Yet no one in the hierarchy has been punished and the sheeple continue to give financial support to and kiss the wide asses of the Vatican and occupants of bishoprics who ought to in many cases be behind bars. It is beyond sickening to anyone with an ounce of true morality. Here are highlights from the Age:

Then he will go to a crowded and tense County Court in Melbourne where notorious paedophile Christian Brother Robert Charles Best, 70 - one of a ring of Catholic educators and a priest who sexually brutalised and terrorised many of the city's children over years - will be sentenced on 27 counts relating to sexual violence against children aged seven to 13.

The extent of the appalling child sexual abuse by Best, convicted paedophile Father Gerald Ridsdale, the then parish priest, Christian Brother Edward Dowlan, and others, largely at three local schools, may never be known. The multi-generational damage they have inflicted on families, including the spouses and children of their victims, is, however, decades later, almost palpable.

An alleged church cover-up of the crimes condemned the child victims to further torment, while more potent evidence of the abuse can be found in various graveyards where 24 young men are buried. They killed themselves, according to university researcher Detective Sergeant Kevin Carson, in the years after the abuse by Best and Ridsdale. Steven believes his brothers and cousin are among them.

Steven's life story, as with many of those who suffered at the hands of paedophile priests and religious institution educators, is a litany of self destruction. He fled Ballarat for many years because he couldn't bear the painful memories of the prolonged sexual abuse by Best and Ridsdale that started in grade 6. He was aged 10.

Best once forced him and another boy to strip and fondle each other in front of him, and Ridsdale raped him when he went to talk to his priest about the abuse by others. Peter Curran's family believes the abuse from Best, Dowlan and Ridsdale that Peter suffered in Ballarat caused him to take his life with a knife. He used tell him wife, Colleen Curran, how much he hated the Catholic Church and that he wanted his children to never enter one.

Colleen learnt from Peter - who went to St Paul's, St Alipius and St Pat's - that he had fought back against his abusers, but the "men of God" then beat him up. He told her he had been beaten, aged nine, at home and accused of lying when he told his family what had happened at school. As an adult, he used go out at night with a sledge hammer to destroy church property and did damage at St Patrick's College and at St Alipius primary school.

Colleen Curran will not go to court on Monday to hear the judge sentence Best, described in the legal proceedings as evil, a bully and a pervert. Instead, she will tell her dead husband: "They got the bastard, finally."

They may have got Best, but the occupant of the throne of St. Peter and countless bishops and cardinals continue to go unpunished. As a parent myself, if I were the parent of one of these suicide victims, I honestly cannot say that I would not want to engage in some vigilante justice of my own against those who knew of the abuse and did nothing other than protect the sexual predators. I can say one thing, however: I will never, ever set foot in a Catholic Church again. Never, ever.
Posted by Michael-in-Norfolk at Friday, August 05, 2011