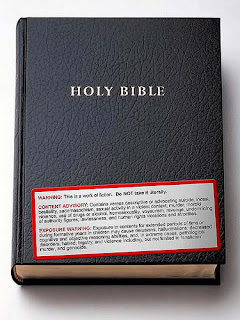 The far right continues to endeavor to depict Norwegian mass murderer Anders Breivik as "not Christian" even though his "manifesto" and his Templar identity indicate that he viewed himself as defending western Christendom from the Muslim infidel and a multiculturalism that was welcoming to non-whites and non-Christians. It's sadly typical of the far right and the Christianist among them for whom hate and hypocrisy are their principal attributes. When not asking for money to oppose some threat to "religious freedom," they are incessantly pontificating against gays, Muslims, immigrants and other "sinners" in general.
*
These efforts to depict Breivik as "not Christian" also utterly ignore the Old Testament of the Bible where the pillaging and slaughter of those not conforming to the laws of a vengeful God and/or the Jewish religion is writ large. In these recurrent images of violence and destruction, neither women nor children are spared. Breivik's actions were certainly consistent with this violent message. And Breivik certainly displayed the hate, intolerance and bigotry which seem to be the hallmarks of today's conservative Christianity. Amy Sullivan has a piece in Time that looks at this double standard of those trying to disassociate Breivik from Christianity as preached by so many in the professional Christian set who seem to adhere only a violent Old Testament version of Christianity. Here are highlights:
*
Ever since the murderous rampage in Norway last week, Bill O’Reilly and other American conservatives have sought to insist that the alleged Norwegian terrorist Anders Breivik is not a Christian. . . . . The belief underlying these denials of Breivik’s professed Christian identity is that news outlets would only label a terrorist “Christian” in order to discredit Christianity.
*
But the Christian designation itself was informed by Breivik’s own voluminous writings, which show a man animated by a very twisted version of Christian thought and history. . . . In fact, the clash-of-civilizations nature of Breivik’s manifesto is not so different from the warped interpretation of Islamic thought and history that motivates some Muslim terrorists.
*
[Bill] O’Reilly remains unchastened by the fact that he routinely rebukes Muslims for distancing their faith from terrorists in the way that he has sought to distance Christianity from Breivik this week. He and other conservatives have focused on their doubts about whether Breivik “practices” Christianity as reason to refrain from labeling him Christian.
*
O’Reilly and others do damage to Christianity by implying that it’s so fragile as to be threatened when one member does something truly vile. As heinous as Breivik’s alleged acts of terror were, Christianity has withstood worse. Islam has withstood the past ten years of turmoil within and criticism without. The best defense against terrorists like Breivik is to show how his interpretation of Christianity is wrong, not to deny that he could have come out of the tradition.
Posted by Michael-in-Norfolk at Sunday, July 31, 2011

"The best defense against terrorists like Breivik is to show how his interpretation of Christianity is wrong..."

Yeah, except they can't do this because they share the same views. The only difference is that people like O'Reilly and his ilk is that they prefer to gin up their followers and have them do the dirty work. That way O'Reilly and friends can feign innocence and pretend that their hands are clean.