The Establishment's Failure to Recognize the Insanity of the GOP 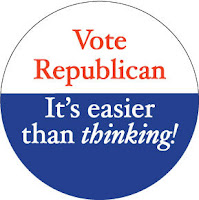 As we get closer and closer to financial meltdown in the coming week, there's lots of blame to go around, but most of it boils down to the failure of the so-called "Establishment" to realize that the far right in the Republican Party is no longer a faction in touch with reality or, in some instances such as Michele Bachmann and her most radical brethren , even sane. Hence why some say the stock market hasn't dropped more sharply. Everyone assumes at some point rationality will prevail. The problem is that with the far right of the Republican Party and the equally toxic GOP base, we are dealing with crazy people and religious fanatics. In their own way, they are just as crazy and fanatical as the Islamic terrorists that they so love to condemn and hold up as a never ending bogey man. The irony is that they are about to do more damage to the nation than the terrorists came close to achieving on 9/11. Here are highlights from a piece in The New Republic that looks at the build up to the potential coming financial apocalypse:
*
[T]hey're [Wall Street] relatively calm because they simply cannot bring themselves to believe that we're not, in the end, going to raise the ceiling. It's too outlandish that we would, through the collective action of our congressmen, suddenly and for no apparent reason shoot ourselves in the head.
*
The basic problem here is that Wall Street has massively underestimated the loony determination of the Republican right. McArdle's description reminded me of Ellis, the financial hot shot in "Die Hard" who thinks he can deal with the terrorists the way he deals with corporate takeovers in his regular work
*
The failure to understand the crisis we were entering was widely shared among centrist types. When Republicans first proposed tying a debt ceiling hike to a measure to reduce the deficit, President Obama instead proposed a traditional, clean debt ceiling hike. He found this position politically untenable for many reasons, one of them being that deficit scolds insisted that using the debt ceiling to force a fiscal adjustment was a terrific idea, and that connecting the deficit debate to a potentially cataclysmic financial event was the mark of seriousness.
*
The main problem is that the Republican Party does not actually care very much about the deficit. It cares about, in order: Low taxes for high-income earners; reducing social spending, especially for the poor; protecting the defense budget; and low deficits. The Obama administration and many Democrats actually do care about the deficit and are willing to sacrifice their priorities in order to achieve it, a desire that was on full display during the health care reform debate. Republicans care about deficit reduction only to the extent that it can be undertaken without impeding upon other, higher priorities. Primarily "deficit reduction" is a framing device for their opposition to social spending, as opposed to a genuine belief that revenue and outlays ought to bear some relationship to each other.
*
Increasing the political leverage of the Republican Party made a Grand Bargain less, not more, likely. Moreover, the deficit hawks who represent the center of Washington establishment thought badly underestimated the danger entailed by tying high stakes negotiations involving the Republican Party to a cataclysmic event. Happy visions of Bob Dole and Tip O'Neill danced in their heads, oblivious to the reality of what they were facing.
*
The only way to understand and deal with today's Republican Party is to treat it and its membership as deranged and unpredictable as Islamic jihadists who are willing to engage in suicide bombings. Rational thought and a concern for the well being of the nation are nowhere on the GOP radar screen any longer.
Posted by Michael-in-Norfolk at Sunday, July 31, 2011