New Gallup Poll: Christians More Willing to Use Attacks on Civilians Than Muslims

The Christianist work over time to depict Islam as a religion of hate and violence yet a new Gallup survey reveals that Muslims are less likely to support violence against and the murder of civilians than - you guessed it - Christians. Atheists and Agnostics also rate higher than Christians in their disapproval of the targeting and killing of civilians. Thus, it seems that when the professional Christians and Christianist demagogues are railing against Muslims, they must be attributing to Muslims their own moral bankruptcy. The charts below look at two difference scenarios concerning attacks on and the murder of civilians. When it comes to military attacks against civilians, Muslims are twice as likely as Protestant Christians to say such attacks are never justified. Here are highlights from the Gallup findings: 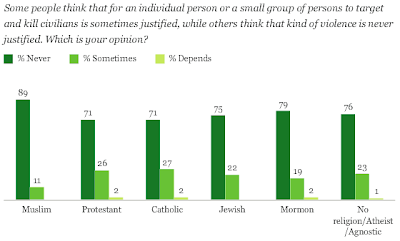 There is wider agreement that attacks on civilians by individuals or small groups are never justified. At least 7 in 10 American adults from all major religious groups agree that these attacks are never justified, but Muslim Americans again are most opposed, with 89% rejecting such attacks.

One explanation for the findings in my view is the sad fact that I believe that many Christians continue to see non-Christians as less than fully human. Thus, violence against them by the military is acceptable. It's sick and disgusting, but I suspect it is the unspoken factor.
Posted by Michael-in-Norfolk at Wednesday, August 03, 2011