Obama - The Least Bad Option for the LGBT Community 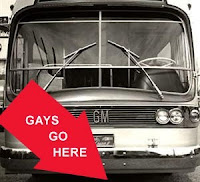 Proving once again that he's spineless and ever ready to throw LGBT Americans under the bus - after a shake down of our money first - Barack Obama said last night at an A-list LGBT fundraiser in New York City that marriage equality is an issue best left to the states. Where would Mr. Obama and many black Americans be today if that had been the attitude taken towards racial equality during the 1960's? The statement is a cop out and an outright insult. I truly do not believe anything that Obama says at this point. The Washington Blade has these highlights on Obama's latest betrayal:
*
President Obama reiterated on Thursday that the marriage issue should be left to the states during an LGBT fundraiser in New York City that took place amid increasing pressure for him to endorse marriage rights for gay couples.
*
Obama drew on his opposition to the Defense of Marriage Act, which prohibits same-sex marriage, in his remarks on the New York marriage bill and leaving the issue to the states. The president has called for legislative repeal of DOMA and, in February, announced the law was unconstitutional and his administration would no longer defend it in court. “Part of the reason that DOMA doesn’t make sense is that traditionally marriage has been decided by the states,” Obama said.
*
About 600 donors, mostly male, sat at round tables in a large ballroom for the $1,250-a-plate dinner at the Sheraton Hotel and Towers in New York. Gay actor Neil Patrick Harris and Capt. Jonathan Hopkins, a West Point graduate who was discharged under “Don’t Ask, Don’t Tell,” introduced Obama at the start of the event.
*
The whole affair translates to "I don't give a crap about you or your lives, but please give me your money." A column in the Guardian looks at Obama's record on LGBT issues and describes him as "the least bad option." Here are highlights from that column:
*
This intensive media campaign [by the White House] has been put into motion precisely because not everyone's on board. Talks with major LGBT donors, bloggers, and activists reveal marked discontent with the gap between the candidate who promised to be a "fierce advocate" for LGBT Americans and the president who has delivered no legislative victory besides repeal of "don't ask, don't tell" – and that under great duress. (I'm not counting the Hate Crimes Prevention Act as an Obama victory because Congress did all the hard work, while Obama merely signed it into law.)
*
Otherwise, Obama's contributions have amounted to little more than a generous sprinkling of what blogger Pam Spaulding calls "baby steps for equality" or "Cinderella Crumbs". These are "a shiny, beautiful, breathtaking accomplishment that turns into a pumpkin at midnight – in this case, whenever a future homophobic president decides to rescind the baby step."
*
[A]s Robin McGehee, the director and co-founder of GetEQUAL, puts it, "We were promised the Acura with all the accoutrements, but wound up with a stripped-down Honda instead."
*
Of course, you'd never know there were hordes of politically active LGBT people who are ticked off with Obama from reading the mainstream press. Major strategic placements by Obama's people in that realm include the gay-donors-fuel-Obama's-2012-campaign story they fed to Politico, now being featured in a magazine widely distributed at Los Angeles Pride. . . . a powerful core of primarily LGBT grassroots activists and bloggers aren't drinking the Kool-Aid.
*
Other signs of discontent include last week's brawl at Netroots Nation, a national gathering of progressive activists and bloggers. . . . . And then there are the physical manifestations of discontent. The ones that protesters outside of tonight's LGBT Gala will carry include "Evolve Already" and "Do you believe in evolution? We do."
*
Candidate Obama promised LGBT people the world in 2008, and our community provided a disproportionate amount of the money, volunteer hours and enthusiasm so crucial to his win. Now, when he and the DNC are back to woo us for 2012, is the time to ask for more than vague assurances of hope and change.
Posted by Michael-in-Norfolk at Friday, June 24, 2011