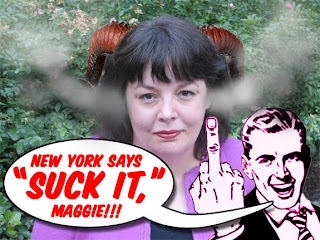 I'm sorry, but the time has come to force a revelation of the source of the funding of the National Organization for Marriage. The organization has repeatedly violated campaign finance disclosure laws in a number of states and to date we still do not know who is bankrolling the organization. Now, it the wake of a humiliating defeat in New York State NOM is threatening to spend $2 million in the 2012 election cycle targeting pro-gay legislators who do lick Maggie Gallagher's boots and vote in the way she and her fellow Christofascists demand. The public has a right to know who is behind this vicious, veracity challenged organization that continues to endeavor to undermine the U.S. Constitution's promise of religious freedom for all - not just fat, intolerant, self-enriching cows like Ms. Gallagher and her minion Brian Brown. Here are highlights from the Advocate:
*
Defeated opponents of marriage equality ostensibly spent Friday evening avoiding New York City's West Village, licking their wounds, and releasing statements on just how doomed the Empire State is following a historic victory for LGBT rights . . .
*
The National Organization for Marriage went a step further in announcing a reported minimum $2 million campaign in the 2012 election cycle to "hold politicians accountable for their vote" in hopes of "overturning same-sex marriage in New York."
*
The Los Angeles Times quoted Gallagher's puppet, Brian Brown as follows:
*
Brian Brown, president of the National Organization for Marriage, vowed that in conjunction with the state's Conservative Party, his group would spend more than $1 million to ensure that lawmakers who supported gay marriage would be defeated in the next election.
*
"All [the vote] means is that Gov. Cuomo was able to strong-arm and push through, because of the weakness of some Republicans, a gay marriage bill," Brown said. "It doesn't go away, and we're going to make sure the people are held accountable."
*
If it turns out that the Mormon Church or the Catholic Church for example are bankrolling NOM, those institutions need to immediately lose their tax exempt status. Moreover, the public needs to know how NOM is seeking to undermine the Constitution.
Posted by Michael-in-Norfolk at Saturday, June 25, 2011