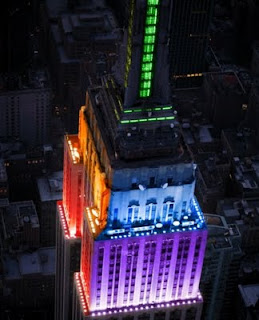 Needless to say, the hate merchants at NOM, religious extremists like Albert Mohler of the Southern Baptist Convention, and the protectors of child rapists in the Catholic Church hierarchy are acting as if the world has come to an end now that religious freedom has triumphed in New York State. NOM has equated last night's vote as a "betrayal of Jesus," Mohler is whining that "marriage has been sacrificed," and Peter Sprigg at FRC is ranting that "no religious exemptions can redeem homosexual “marriage.”
*
These merchants of intolerance and hatred of others are losing the war and they are hysterical because they know that eventually their lucrative gigs will be up. In addition, the religious extremist are beside themselves that their ability to force their beliefs on others is fading. After money, power and control are the true gods of these people. It's an ugly fact and it's what will be the death of Christianity. Bob Felton has a hard hitting analysis of why these bigots are so upset. Here are some highlights:
*
If you keep in mind that Mohler teaches that not even wedding vows may interfere with slavish obedience to Jesus (meaning, really, slavish obedience to the preacher), you understand what he is actually upset about. It isn’t marriage that has taken a hit — it is Holy Men, whose gatekeeping function, and therefore power, is in steady retreat.
*
Mohler demand[s] that you enter marriage with dishonest intent, committed to the marriage in only such measure as it doesn’t interfere with submission to his Invisible Friend (a sociopath, by the way, who demands that all men be broken to their knees). This is why evangelicals have the highest divorce rate in the country: They teach that marriage, its mutual loyalties and shared ambitions, is always provisional, contingent upon the vagaries of day-to-day revelation. It’s not the gay couple in the neighborhood who is the threat to marriage; it’s the preacher.
Posted by Michael-in-Norfolk at Saturday, June 25, 2011