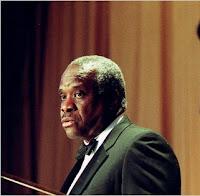 I have written previously about Supreme Court Justice Clarence Thomas' numerous ethical lapses and his outright fraudulent financial disclosures that have failed to reveal the far right money gravy train enjoyed by Thomas' wife and, indirectly, Thomas himself. Likewise, expensive gifts to Thomas and his pet projects appear to be continuing unabated. Now, the New York Times is reporting several huge financial windfalls that Thomas has enjoyed compliments of Harlan Crow, a Dallas real estate magnate and a major contributor to conservative causes. I've been blunt on this blog in terms of speaking my view that Thomas needs to resign from the Supreme Court and, if he will not go voluntarily, he needs to be removed. He is a disgrace as a member of the Supreme Court plain and simple. Think Progress has a piece that documents why Thomas needs to go from the Court as have other justices that have engaged in similar unethical behavior. First, these highlights from the Times story:
*
Mr. Crow stepped in to finance the multimillion-dollar purchase and restoration of the cannery, featuring a museum about the culture and history of Pin Point that has become a pet project of Justice Thomas’s.
*
The project throws a spotlight on an unusual, and ethically sensitive, friendship that appears to be markedly different from those of other justices on the nation’s highest court. Mr. Crow has done many favors for the justice and his wife, Virginia, helping finance a Savannah library project dedicated to Justice Thomas, presenting him with a Bible that belonged to Frederick Douglass and reportedly providing $500,000 for Ms. Thomas to start a Tea Party-related group. They have also spent time together at gatherings of prominent Republicans and businesspeople at Mr. Crow’s Adirondacks estate and his camp in East Texas.
*
Supreme Court ethics have been under increasing scrutiny, largely because of the activities of Justice Thomas and Ms. Thomas, whose group, Liberty Central, opposed President Obama’s health care overhaul — an issue likely to wind up before the court. Mr. Crow’s donation to Liberty Central was reported by Politico.
*
Mr. Crow has not personally been a party to Supreme Court litigation, but his companies have been involved in federal court cases, including four that went to the appellate level. And he has served on the boards of two conservative organizations involved in filing supporting briefs in cases before the Supreme Court. One of them, the American Enterprise Institute, with Mr. Crow as a trustee, gave Justice Thomas a bust of Lincoln valued at $15,000 and praised his jurisprudence at an awards gala in 2001.
*
There are a number of reasons Justice Thomas might be thankful to Mr. Crow. In addition to giving him the Douglass Bible, valued 10 years ago at $19,000, Mr. Crow has hosted the justice aboard his private jet and his 161-foot yacht, at the exclusive Bohemian Grove retreat in California and at his grand Adirondacks summer estate called Topridge, a 105-acre spread that once belonged to Marjorie Merriweather Post, the cereal heiress.
*
The code of conduct is quite clear that judges are not supposed to be soliciting money for their pet projects or charities, period,” said Arn Pearson, a lawyer with Common Cause. “If any other federal judge was doing it, he could face disciplinary action.”
*
Since 2004, Justice Thomas has never reported another gift. He has continued to disclose travel costs paid by schools and organizations he has visited for speeches and teaching, but he has not reported that any travel was provided by Mr. Crow. Travel records for Mr. Crow’s planes and yacht, however, suggest that Justice Thomas may have used them in recent years.
*
Here are highlights from Think Progress as to why all of this is a serious problem:
*
If this sounds familiar, it’s because America has seen this movie before. Indeed, the Thomas scandal is little more than a remake of the forty year-old gifting scandal that brought down Justice Abe Fortas. Like Thomas, Fortas liked to associate with wealthy individuals with potential business before his Court. And like Thomas, Fortas took inappropriate gifts from his wealthy benefactors.
*
It is difficult to distinguish Fortas’ scandal from Thomas’. Like Fortas, Thomas accepted several very valuable gifts from parties who are frequently interested in the outcome of federal court cases. One of Thomas’ benefactors has even filed briefs in his Court since giving Thomas a $15,000 gift, and Thomas has not recused himself from each of these cases.
*
Of course, Thomas is also the least likely Justice to actually follow the command of precedent. Thomas embraces a discredited theory of the Constitution which would return America to a time when federal child labor laws were considered unconstitutional. His fellow justices criticize him for showing “utter disregard for our precedent and Congress’ intent.” Even ultra-conservative Justice Antonin Scalia finds Thomas’ approach to the law too extreme — in Scalia’s words “I am a textualist. I am an originalist. I am not a nut.”
*
But Thomas’ disregard for what has come before him changes nothing about the precedent he faces. If Abe Fortas had to resign his seat, so too should Clarence Thomas.
Posted by Michael-in-Norfolk at Monday, June 20, 2011