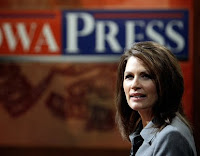 The ultra-far right elements of the Christian Right and their puppets in the GOP always like to act holier than thou and accuse others of not playing by the rules while in reality it is they themselves who are all too typically breaking the rules and violating the law. It seems GOP loon Michelle Bachmann is a case in point. It seems based on a Roll Call story that Bachmann was using House of Representative funds to underwrite Tea Party functions - something that is against the law. And like corrupt Supreme Court Justice Clarence Thomas, it sounds like Bachmann has deliberately failed to account for some of her activities. It would be nice if the House of Representatives would call Bachmann on the carpet, but given that it is controlled by the GOP, I'm not going to be holding my breath. Here are highlights from the Roll Call story:
*
On Nov. 5, 2009, at the behest of Rep. Michele Bachmann, thousands of tea party activists descended on the Capitol to vent their rage over the health care overhaul bill pending before Congress. The assembled activists chanted, "Kill the bill! Kill the bill!" and waved signs opposing a government takeover of health care — but they may not have known that the same government was paying for the event.
*
According to House expense reports, Bachmann and three conservative GOP colleagues — Reps. Tom Price (Ga.), Steve King (Iowa) and Todd Akin (Mo.) — each paid $3,407.50 that day, a total of $13,630, to a sound and stage company called National Events, apparently for the sound system used at the rally.

The money came from the Members' taxpayer-funded office accounts, despite House rules prohibiting the use of these funds for political activities.
*
Bachmann billed the event as a "press conference," which can be funded from official accounts. But no questions were taken from the press and, unlike most press conferences, it opened with a prayer, the national anthem and a recitation of the Pledge of Allegiance.
*
The ethics watchdog group Citizens for Responsibility and Ethics in Washington filed a complaint with the Office of Congressional Ethics at the time, claiming Bachmann had violated a clearer directive from the House Administration Committee that Member websites "may not include grassroots lobbying or solicit support for a Member's position."
*
Bachmann's office accounts show other trips outside her district that do not correlate with public appearances, but after June 2009, the House stopped disclosing the destination of office-funded travel, so it is impossible to know where Bachmann has gone on the taxpayer dime since then.
*
Special rights and special rules are what the far right and GOP seize for themselves while claiming it is others who are playing foul. Hypocrite is too nice of a term for these folks.
Posted by Michael-in-Norfolk at Tuesday, June 21, 2011