Cuccinelli Strives to Undermine Separation of Church and State 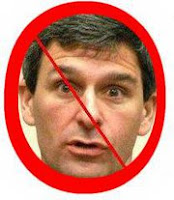 Last week Virgina Attorney General - and in my view certifiable nut case - Ken Cuccinelli again demonstrated that what he'd really like to see is the overthrow of both Virginia's and the USA's governments and the establishment of a theocracy in their place as he spoke with to hard right pastors and urged them to push their theocratic and anti-religious freedom agenda through political involvement. Naturally, Cuccinelli - whose ego seems to know few limits - sees himself as one of the high priests under any such theocratic government. The man is dangerous. The Washington Post looks at Cuccinelli's remarks at to the coven of Christianist pastors. Here are highlights:
*
Virginia Attorney Gen. Ken Cuccinelli spoke at a breakfast Thursday morning for pastors in the Fredericksburg area, providing guidance on how ministers can be involved in politics without jeopardizing the tax-exempt status of their churches.
*
Event organizers--the Virginia Christian Alliance and the Fredericksburg Christian Schools--said before the breakfast that they expected 300 attendees at the ”Christian Citizenship and Godly Government.”
*
Cuccinelli (R) said pastors can personally endorse candidates, but not on behalf of their churches. They can distribute voter’s guides that outline positions of candidates on issues but those guides cannot specify whether individual candidates’ views are consistent with church teachings. They can rent their mailing lists to candidates, at market value, and they can allow candidates to use their facilities, provided they are charged fees if other civic groups are as well.
*
“Continue to be good shepherds to your congregations – and don’t be afraid when your shepherding includes giving guidance on issues that fall in the political world, because those are the same issues your congregants face each day in their world. Let your voice be heard. Speak out and guide your flock toward what is right and what is true.”
*
According to a Web site for the groups, Cuccinelli’s “Pastors, Pulpit and the Law” lecture would outline “what churches and pastors can do in regards to politics, political candidates and lobbying; what is legal and what the limitations are.”
*
In an e-mail, Cuccinelli spokesman Brian Gottstein said Cuccinelli’s speech was not designed to dispense legal advice. “He cannot give legal advice to anyone other than his government clients,” Gottstein said. “
*
Sure sounds like he was giving legal advice regardless of what his office says. But then, truth and veracity are rare commodities among the Christian Taliban.
Posted by Michael-in-Norfolk at Sunday, June 19, 2011