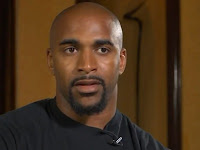 For years it has driven me to distraction to watch members of the black community act as water carriers for the Christianists/white supremacists who long kept blacks as slaves and then fought tooth and claw to maintain segregation as a way of life. The Christianists/white supremacists (I combine the terms because of the huge overlap between the groups - even within "family values" group like Family Research Council) must be laughing their asses off at the way they dupe blacks time and time again into acting as their lackeys. It drives me crazy!! The latest "boy" to do the bidding of the Christianists/white supremacists is former football star David Tyree who I slammed the other day for his bigotry against marriage equality in New York State. Now, as Alvin McEwen points out on Holy Bullies and Headless Monsters, Tyree is drawing praise - at least in terms of his anti-gay bigotry - from a noted white supremacist. Hello, Mr. Tyree! Can you get your head out of your ass? Here are some highlights from Alvin's post:
*
David Tyree can count on one person to support his negative stance on gay marriage - a man by the name of James Edwards. For those who don't know, Edwards is a white supremacist. According to the Southern Poverty Law Center:
*
Edwards, 27, is the host of "The Political Cesspool," a shamelessly white nationalist radio talk show that's broadcast for two hours every weeknight from a studio near Memphis, Tenn., where Edwards grew up and still lives. "The Political Cesspool" in the past two years has become the primary radio nexus of hate in America. Its sponsors include the CCC and the Institute for Historical Review, a leading Holocaust denial organization. Its guest roster for 2007 reads like a "Who's Who" of the radical racist right.
*
Concerning the situation with Tyree and marriage equality, Edwards says the following: Even a blind hog finds an acorn every now and then. While I might not agree with David Tyree on anything else, on this single issue, he is absolutely right.
*
How fascinating. If the issue was about African-Americans, Edwards would be saying things like: "Crime and violence follow African-Americans wherever they go. And if you think that is racist, then spend some time on the mean streets of south Memphis." . . . . "Whites are in for the fight of their lives. America is becoming balkanized. We are being robbed of having a future in the very nation our ancestors carved from the wilderness."
*
I'd like to ask a question: If the African-American movement for equality and the gay movement for equality aren't similar, then how come we both have the same fools trying to put a boot on our necks?
*
Every time a black pastor joins in the rants against gay equality, they need to look and see who they've allied themselves with. They are - stupidly, in my opinion - aiding and abetting the cause of those who hate them and who, if they could have their way, would have them disenfranchised and totally marginalized. Simply put, they are being played for fools and might as well put a sign around their necks that reads "I'm an ignorant ass."
Posted by Michael-in-Norfolk at Thursday, June 23, 2011