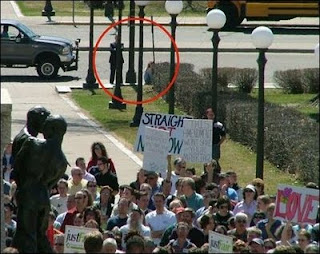 Rolling Stone has a lengthy piece on GOP loon and Christofascist Michele Bachmann (seen hiding while spying on gay rights activists at left) . The picture that it paints is none too pretty. In my view, Bachmann is a clear and present danger to constitutional government and in some ways I find the woman even more frightening than Sarah Palin. The big question to me is one of whether or not the trained circus dogs in the main stream media will break loose of their leashes and advise the general public as to just how looney tunes Ms. Bachmann is in fact. So many bad things have happened - e.g., the Iraq War - and continue to happen - the GOP threats to the poor and unemployed while seeking further tax cuts for the obscenely wealthy - because the MSM no longer does its job. Investigative reporting - as opposed to mindlessly parroting sound bites from the GOP and the Christian Right - seems to be a lost art. Here are a few highlights from the Rolling Stone article (read the whole article):
*
Close your eyes, take a deep breath, and, as you consider the career and future presidential prospects of an incredible American phenomenon named Michele Bachmann, do one more thing. Don't laugh.
*
It may be the hardest thing you ever do, for Michele Bachmann is almost certainly the funniest thing that has ever happened to American presidential politics. . . . .
*
But don't laugh. Don't do it. And don't look her in the eyes; don't let her smile at you. Michele Bachmann, when she turns her head toward the cameras and brandishes her pearls and her ageless, unblemished neckline and her perfect suburban orthodontics in an attempt to reassure the unbeliever of her non-threateningness, is one of the scariest sights in the entire American cultural tableau. She's trying to look like June Cleaver, but she actually looks like the T2 skeleton posing for a passport photo. You will want to laugh, but don't, because the secret of Bachmann's success is that every time you laugh at her, she gets stronger.
*
In modern American politics, being the right kind of ignorant and entertainingly crazy is like having a big right hand in boxing; you've always got a puncher's chance. And Bachmann is exactly the right kind of completely batshit crazy. Not medically crazy, not talking-to-herself-on-the-subway crazy, but grandiose crazy, late-stage Kim Jong-Il crazy . . . .
*
Bachmann's story, to hear her tell it, is about a suburban homemaker who is chosen by God to become a politician who will restore faith and family values to public life and do battle with secular humanism. But by the time you've finished reviewing her record of lies and embellishments and contradictions, you'll have no idea if she actually believes in her own divine inspiration, or whether it's a big con job.
*
Young Michele found Jesus at age 16, not long before she went away to Winona State University and met a doltish, like-minded believer named Marcus Bachmann. After finishing college, the two committed young Christians moved to Oklahoma, where Michele entered one of the most ridiculous learning institutions in the Western Hemisphere, a sort of highway rest area with legal accreditation called the O.W. Coburn School of Law; Michele was a member of its inaugural class in 1979.
*
Bachmann was mentored by a crackpot Christian extremist professor named John Eidsmoe, a frequent contributor to John Birch Society publications who once opined that he could imagine Jesus carrying an M16 and who spent considerable space in one of his books musing about the feasibility of criminalizing blasphemy.
*
Bachmann says she believes in a limited state, but she was educated in an extremist Christian tradition that rejects the entire notion of a separate, secular legal authority and views earthly law as an instrument for interpreting biblical values. As a legislator, she not only worked to impose a ban on gay marriage, she also endorsed a report that proposed banning anyone who "espoused or supported Shariah law" from immigrating to the U.S. (Bachmann seems so unduly obsessed with Shariah law that, after listening to her frequent pronouncements on the subject, one begins to wonder if her crazed antipathy isn't born of professional jealousy.)
*
The woman is truly crazy and in my view, her followers need some serious mental health intervention (as does Bachmann herself). Perhaps we need to ship her to Iran or Saudia Arabia. She wants a religious extremist government,? Then let her live under one for a while.
Posted by Michael-in-Norfolk at Thursday, June 23, 2011