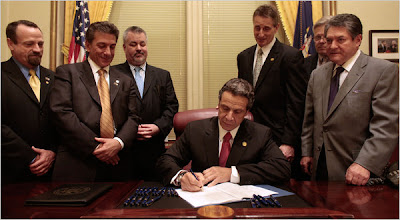 WOW!!!!!!!!! The photo above shows Andrew Cuomo signing the marriage bill that cleared the New York State Senate around 10:30 last night. I will admit that I'd been almost afraid to get my hopes up too much that equality would prevail in New York, the Empire State. I heard the new last night as we were at a OBX Pride party/performance by Derrick Barry at a club up the beach. The entire place went nuts when the DC shouted out the news between one of Derrick's performances. Like so many Pride events, we had young and old, black white and the whole spectrum of the community in attendance. With the passage of same sex marriage in New York, one can only hope that the pressure will be ratcheted up on the rest of the states to move into the 21st century and embrace modernity. No doubt Virginia will be one of the last hold outs. For a state that in the early days of the nation was a font of reason and intellect, Virginia has been in the rear guard of bigotry and prejudice for most of its history. Here are highlights from the New York Times:
*
Lawmakers voted late Friday to legalize same-sex marriage, making New York the largest state where gay and lesbian couples will be able to wed and giving the national gay-rights movement new momentum from the state where it was born.
*
The marriage bill, whose fate was uncertain until moments before the vote, was approved 33 to 29 in a packed but hushed Senate chamber. Four members of the Republican majority joined all but one Democrat in the Senate in supporting the measure after an intense and emotional campaign aimed at the handful of lawmakers wrestling with a decision that divided their friends, their constituents and sometimes their own homes.
*
Senator Mark J. Grisanti, a Republican from Buffalo who had sought office promising to oppose same-sex marriage, told his colleagues he had agonized for months before concluding he had been wrong. “I apologize for those who feel offended,” Mr. Grisanti said, adding, “I cannot deny a person, a human being, a taxpayer, a worker, the people of my district and across this state, the State of New York, and those people who make this the great state that it is the same rights that I have with my wife.”
*
Senate approval was the final hurdle for the same-sex marriage legislation, which was approved last week by the Assembly. Gov. Andrew M. Cuomo signed the measure at 11:55 p.m., and the law will go into effect in 30 days, meaning that same-sex couples could begin marrying in New York by late July.
*
But the unexpected victory had a clear champion: Mr. Cuomo, a Democrat who pledged last year to support same-sex marriage but whose early months in office were dominated by intense battles with lawmakers and some labor unions over spending cuts. Mr. Cuomo made same-sex marriage one of his top priorities for the year and deployed his top aide to coordinate the efforts of a half-dozen local gay-rights organizations whose feuding and disorganization had in part been blamed for the defeat two years ago.
*
[A]fter days of contentious discussion capped by a marathon nine-hour closed-door debate on Friday, Republicans came to a fateful decision: The full Senate would be allowed to vote on the bill, the majority leader, Dean G. Skelos, said Friday afternoon, and each member would be left to vote according to his or her conscience.
*
“The days of just bottling up things, and using these as excuses not to have votes — as far as I’m concerned as leader, it’s over with,” said Mr. Skelos, a Long Island Republican who voted against the bill.
*
The boyfriend and I will be in New York City in September and just maybe we'll tie the knot! The news from New York is an amazing development indeed. And a wonderful rebuke to the Roman Catholic Church - especially Timothy "Porky Pig" Dolan, Archbishop of New York.
Posted by Michael-in-Norfolk at Saturday, June 25, 2011

The head of an executive branch leading legislators? What a novel idea!And it gives me a name to write in on my pesidential primary vote next year