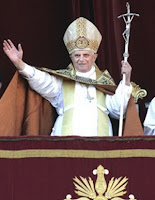 Canada.com is carrying a Reuters story that provides a brief summary of the Catholic Church sexual abuse scandals. It is noteworthy how few of the high Church officials have resigned or received any punishment. Pope Benedict XVI claims "outrage" over the scandals, yet no one has been fired or forced to resign, so his outrage seems more a case of crocodile tears rather than any real remorse. Or is the outrage mere over the fact that the Church hierarchy has been exposed as a moral cesspool? Here's the overview - one cannot help but wonder why anyone gives these bitter old queens in dresses the time of day much less their hard earned money:
*
IRELAND:
• April 2002, Bishop Brendan Comiskey of Ferns, one of Ireland's best-known clerics, resigned over his handling of charges against a priest of his diocese who committed suicide in 1999 while facing 66 charges of sexual abuse.
• March 2009, Bishop John Magee of Cloyne, under fire for his handling of reports of sexual abuse, quit his daily duties to deal with the inquiry.
• May 2009, The Commission to Inquire into Child Abuse issued a harrowing five-volume report that took nine years to compile. It said priests beat and raped children during decades of abuse in Catholic-run institutions.
• Nov. 2009, A government-commissioned inquiry into abuse in Dublin from 1975 to 2004 released on Nov. 26 said church authorities covered up widespread cases of child sexual abuse until the mid-1990s.
*
CANADA
• Oct 2009, Bishop Raymond Lahey of Antigonish in Nova Scotia was charged with possession and importation of child pornography. Earlier this year, he had overseen a $13 million settlement with clerical abuse victims in the Antigonish diocese in a case dating back to 1950.
*
UNITED STATES
• 2002 — Boston's Cardinal Bernard Law resigned over charges he transferred clerical abusers to other parishes to cover up the scandal.
• June 2002, The U.S. Conference of Catholic Bishops directed dioceses to investigate all charges of sexual abuse.
• Feb. 2004, Independent researchers commissioned by the U.S. Conference of Catholic Bishops said a total of 10,667 people accused U.S. priests of child sexual abuse from 1950 through 2002. More than 17 per cent of accusers had siblings who were also allegedly abused. Among accusers, 47 per cent said they had been abused numerous times.
• July 2007, the Archdiocese of Los Angeles agreed to pay $660 million to 500 victims of sexual abuse dating as far back as the 1940s in the largest compensation deal of its kind.
• April 2008, Pope Benedict met victims of sexual abuse by priests during his visit to the United States in an effort to heal the scars. The U.S. Church has paid some $2 billion in settlements to victims since the scandal first broke in 1992.
• Oct. 2009, The diocese of Wilmington, Delaware filed for bankruptcy protection. It later agreed to provide documents to alleged sex abuse victims to postpone the start of about 80 civil cases. Since 2002, the Wilmington diocese has settled eight cases for an average of about $780,000 each.
*
AUSTRALIA
• July 2008, On a visit to Australia, Pope Benedict apologized for sexual abuse by clergy, condemning it as "evil" and saying abusers should be brought to justice. At that time there had been 107 convictions for sexual abuse in the Catholic Church there.
*
AUSTRIA
• July 2004, Austrian News magazine Profil ran pictures of priests kissing and groping seminarians at a Roman Catholic seminary in the St. Poelten diocese.
*
BRITAIN
• July 2000, London Cardinal Cormac Murphy-O'Connor acknowledged making a mistake in a previous post in the 1980s by allowing a paedophile priest to continue working. The priest was jailed in 1997 for abusing nine boys over a 20-year period.
*
MEXICO
• March 2009, Pope Benedict ordered a probe of the Legion of Christ priestly order whose founder was discovered to be a sexual molester with at least one child with a mistress. In 2006, Pope Benedict told the founder, Father Marcial Maciel, to retire to a life of "prayer and penitence." Maciel died in 2008.
*
Sources: Reuters/United States Conference of Catholic Bishops
Posted by Michael-in-Norfolk at Friday, December 11, 2009