A Message that National Democrats Need to Hear 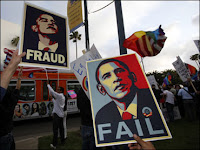 In today's Richmond Times Dispatch former Virginia Governor Douglas Wilder - the first black elected to a governorship since Reconstruction - has a message that ought to kindle fear in the hearts of national Democrats. In his op-ed column, Wilder looks at the reasons why he believes was so badly defeated by Pat Robertson's minion, Bob McDonnell. Simply put, it is a question of ignoring your base and giving them no reason to support you or your platform. And it bears an eerie parallel with what Barack Obama and the Congressional Democrats are doing currently. Obama seems more worried about appeasing members of the GOP who will NEVER do anything other than trying to derail his proposals. Then there are the Democrats in Congress that have less spine than a jelly fish as they pander to lobbyists and deranged Republicans rather than deliver on REAL health care reform and other campaign promises made by Obama. If things remain as they are, Obama may well find him the Creigh Deeds equivalent in 2012. One cannot arrogantly assume that the Democrat base will come out and support him or members of Congress seeking re-election. Here are a few relevant highlights:
*
The defeat of Creigh Deeds, the Democratic gubernatorial candidate, by Republican Bob McDonnell was surprising only by the height of the double-digit margin of victory.
*
I will state that Deeds' inability to resonate with the base of the party was not his only failure, as some have claimed. He also failed to connect with the overall root base of Virginia voters of all persuasions -- particularly independents and crossover Republicans. If a candidate cannot attract the votes of a broad-based coalition, it becomes extremely difficult -- if not impossible -- to win any statewide election in this commonwealth. That is Virginia Politics 101, but sometimes it does us all good to refresh ourselves about the lessons these past few decades of elections have taught us.
*
As one who 30 years ago was in the vanguard of changing the electorate in Virginia's Democratic circles, I am incredulous that anyone could assume the party's base can be taken for granted anymore. It is difficult for me to understand why knowledgeable campaign advisers would instruct a candidate to assume he had the support of the Democratic base while displaying no reason at all for that assumption.
*
With the concerns of the base about job losses, under-employment, health care, and resources for infrastructure improvements mounting on an almost daily basis, Democrats will have to start showing that the base -- which has been so essential to so many of us having been elected and put into positions of leadership -- has real reasons to believe that its votes matter, and that it will see tangible results, notwithstanding the present dilemma of the party.
*
It would be wise for national Democratic Party leaders not to consider what happened in Virginia and New Jersey as aberrations. They must concern themselves with the reality that those two elections might be the start of a trend. . . . The excitement and exuberance caused by the 2008 election has been suffused with numerous challenging and difficult hurdles, even more so than our nation has seen in previous years. The voters who make up the base at the national level, in state after state, locality after locality, keep asking the inexorable question -- "When? When is it time for them?"
*
The new voters of 2008, who rallied for something different -- young people who never participated in past election cycles, including ethnic minorities, independents who voted Democratic in large numbers, and even quite a few disenchanted Republicans -- now are asking, "What was it all for?" If a better job is not done of showing these people that they were not falsely deluded into believing that they had found a voice for the voiceless, we may see a repeat of what we just witnessed. Can we afford that? No.
Posted by Michael-in-Norfolk at Sunday, December 06, 2009