Where the Gay Couples Live 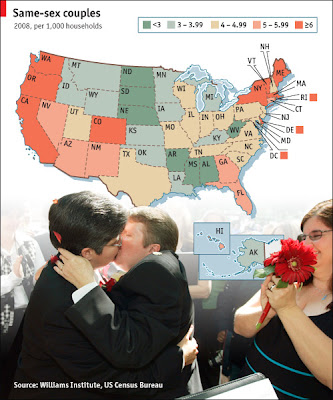 (click image for larger view). Not surprisingly, Virginia is not exactly in the forefront of where gay couples want to live. But for current circumstances with our elderly parents, the boyfriend and I would likely not be living in Virginia either. More can be found at this story in the Economist:
*
In 2008 Maine had the second highest concentration of gay households, with over eight in every 1,000 households said to be headed by partners of the same sex, according to research based on census data by the Williams Institute, a gay rights think-tank at UCLA. Those states where gay marriage is legal or where same-sex partnerships are recognised have a higher proportion of same-sex couples than the national average of 4.7. The District of Columbia is home to most gay households with over 14 for every 1,000.
Posted by Michael-in-Norfolk at Tuesday, December 08, 2009