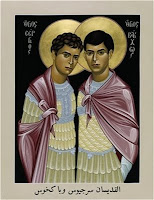 I wrote recently about Frank Schaeffer's new book that his publicist me as a gift. Today, a reader directed me to a post on Frank Schaeffer's blog that reprimands in no uncertain terms the Christianists who disseminate anti-gay hatred for profit and political purposes. Schaeffer has entitled his post as an "Open Letter From Jesus to 'Christian' America." For those not familiar with Schaeffer, his father and mother were early leaders in the Christian Right - a movement that their son has rejected as a perversion of the Gospel message. I agree with Schaeffer's sentiments and am amazed that more cannot see the anti-gay Christianists for what they are: modern day Pharisees who have missed the forest for the trees and who are marked by who they hate - gays, blacks, immigrants, the list goes on and on - as opposed to for their Christian love and efforts for the poor and rejected. Here are some highlights from Schaeffer's post (the post is amazing given Schaeffer's upbringing and deserves a full read):
*
Woe to you American Christians! You say I'm the "son of God" and yet you bully the defenseless in my name. Do you understand the parable of the Good Samaritan?
*
Put it another way: Did you miss the point when I said that those who come to me saying "Lord, Lord we followed you and believed correctly" are the very ones that I will cast out of the Kingdom of Heaven, since they did not care for the least of these, the downtrodden, the poor and the oppressed?
*
Who do you think will inherit the earth: the wealthy leaders of your giant churches or the downtrodden gays scorned and mocked by society? Who's side do you think God is on: the bullied and outcast or the powerful religious leaders with their false smiles?
*
You say you take everything in the Bible seriously and yet you ignore all the many verses about divorce and somehow paper that over because a majority of America buys into divorce now and you don't want to lose your congregations. And half your pastors and religious leaders are divorced and remarried. But you stick it to gay men and women because they are a minority and easy to pick on! Why wax moralistic about one thing you call sin (though I have no problem with divorce per se) and yet stick it to a minority?
*
You judgmental holy rollers are like banks always making a mistake in their own favor! Why do religious so-called conservative Americans always pick on the little guy, the disenfranchised, blacks, Hispanics, immigrants, pregnant women, gay people? I'll tell you why! Because you are bullies! You are the Pharisees passing by on the other side of the road, those who are so sure you're saved because of some nonsense that you believe in my name.
*
You American Christians utterly defaced the name of Christianity with your racism, your slavery and your bigotry against women. And now you're doing it again in your war against gay men and women and in your war against the poor who have no health care. Some of you even have had it as part of your wicked program to reestablish the Biblical law demanding death to gay people that I clearly showed must be broken by the greater law of love. Well, as you judge so you will be judged. Good luck with that!
*
You are like the Pharisees I used to know and who strained out the least gnat of others' so-called misbehavior while turning a blind eye to their own wickedness, hypocrisy and lies. Remember my sayings about taking the beam out of your own eye before removing the speck from your brother's? Quit worrying about gay people and start to worry about your so-called churches, those ash heaps of stinking bigotry and hate.
Posted by Michael-in-Norfolk at Wednesday, December 09, 2009