America Has Been Exporting Homophobia For Decades 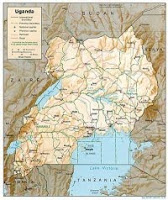 I have posted a number of times on the involvement of American based Christianists' involvement in the "kill gays" legislation pending in Uganda. Now, Maura Hennessey has a sobering and frightening post at Pam's House Blend that takes an honest look at the complicity of the U.S. government in the export of homophobia to Africa and other places in the world. It's no wonder that Barack Obama has not had the spine to condemn the pending legislation in Uganada or the actions of his BFF, Rick Warren. Radical Christianist extremist in this country truly pose a clear and present danger that no one in the government wants to recognize. Islamic extremism did not develop overnight, yet we are allowing the same type of religious based insanity to metastasize because no elected officials want to be accused of being "anti-religion." One has to wonder what it will take to get people to wake the Hell up to the fact that these Christian extremists are both bat shit crazy and hungry for secular power. It is a dangerous and toxic combination. Here are some highlights from Maura's post:
*
Yesterday, I was in Europe having coffee with a colleague in Paris before leaving for New York. Our discussion, by and large about tedious elements of International Law, turned to the situation in Uganda and the lack of a US response to the proposed "Final Solution of the Gay Question" there. She pointed out to me that the US could not afford to point the finger as it had not only tolerated the export of evangelical intolerance but had encouraged it as an official foreign policy from the era of Ronald Reagan onward, resulting in the deplorable rule of Fujimori in Peru and various Guatemalan right wing movements as well as a creeping infestation of the Mexican Government.
*
The US was actively involved in brokering what kind of religions would be supported in South American nations in order to attain a foreign policy goal. Were the US to condemn Uganda strongly now, the States might be embarrassed as other instances of US expansion of the rule of their First Amendment "The Freedom to Worship Jesus in Whatever Right Wing Evangelical Fashion That A Person Might Choose" would eventually come up and prove to be a liability to American political interests south of the Rio Grande.
*
She continued "I heard that people are upset by the comparasion of the gays to Africans(Black Americans). They should be. Gays are not the Nuevos Negros, they are the Nuevos Judíos (new Jews). Sooner or later, the killings will begin, and not only in Uganda. And then, what do we do? Who will invade Nigeria, Columbia, Guatemala, Latvia, Lithuania, Poland and Russia as the Chruches see the US and Europe do nothing to stop Uganda? American churches will block any move to intervene
*
In short, she summarised, America created this movement, a colonialisation of religion masquerading as anti-colonialsism. It exported this parasitic infestation of other nations' foreign policy disguised as self-determination by a single American political party and their right wing religious allies. Either American strongly denounces BOTH the policy and their own churches that largely manipulated its enactment, or the US gays and Lesbians can watch, "probably on television in the bars" the foreshadowing of their own possble future as the hangings are broadcast and the casuality numbers rise.
*
Maura's colleague's warnings may not come to pass in the USA itself, but between the efforts of far right American evangelicals and the Roman Catholic Church - Pope Benedict XVI has yet to strongly condemn the proposed Ugandan legislation despite the large number of Catholics in the nation - things do not bode well for gays in most of Africa. Obama needs to speak out NOW in the strongest language. Likewise, the S.S. government needs to stop America's home grown Christian Taliban from further exporting hatred and homophobia overseas as well as making it clear that their freedom of religion stops when the are actively advocating harm to others. The bottom line is that the Christianist are a force for evil notwithstanding however they may try to disquise their real agenda.
Posted by Michael-in-Norfolk at Sunday, December 06, 2009