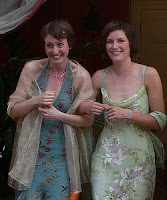 It's amazing - or pehaps shameful depending on one's perspective - how the "Old Europe" so derided by the American far right continues to demonstrate that its nations understand the concept of equality under the civil laws far better than America, the faux land of the free. Rather than being a leader, the USA still allows religion belief to control civil equality in a manner more atune to the Taliban or theocratic regime in Tehran. It is very disturbing and disappointing that America prefers religious based bigotry over civil law equality. Austria - the country where my father's parents emigrated from just prior to World War I - is the latest nation to extend marriage or civil union rights to its citizens. Pink News and Pam's House Blend have more details, Here are some highlights:
*
Austria's parliament has approved legalising civil unions in the country. Out of 174 lawmakers present, 110 voted in favour and 64 voted against, Associated Press reports. The law is due to come into force on January 1st. It will provide gay couples with some of the rights and benefits enjoyed by heterosexual couples.
*
Austrian civil unions are not equal to marriage, since CU'd couples aren't allowed to adopt or use artificial insemination, and couples have to register in the coat closet rather than the regular registry office. Still, this is a huge and excellent start. We know that these prohibitions will fall away in time.
*
Austria joins the following countries in offering civil unions/partnerships: Andorra, Colombia, Czech Republic, Denmark, Ecuador, Finland, France, Germany, Greenland, Hungary, Iceland, Luxembourg, New Caledonia, New Zealand, Slovenia, Switzerland, Wallis and Futuna, United Kingdom, Uruguay.
*
And these countries have full marriage equality: Belgium, Canada, Netherlands, Norway, South Africa, Spain, Sweden .
*
Clearly, the USA's backwardness is becoming embarrassing for those who believe in religious freedom and equality under the civil laws. It is also noteworthy that none of these progressive nations have experience the societal collapse predicted by the Christianists in the USA.
Posted by Michael-in-Norfolk at Friday, December 11, 2009