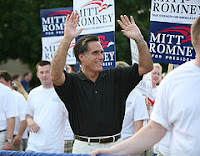 It's not enough for the fundies that Mitt Romney is Mormon and, therefore, not a real Christian. Now Phil Burress, president of Citizens for Community Values, a gay hating and anti-pornography group based on Ohio, is after Romney for issues during his tenure on the Marriott board of directors. I've done some reading up on Burress and he is a total wack job. Tony "I work with the Klan" Perkins is not much better. Here's part of the 365gay article:

Two anti-pornography crusaders, as well as two conservative activists of the type Romney is courting, say the distribution of such graphic adult movies runs counter to the family image cultivated by Romney, the Marriotts and their shared Mormon faith.
"Marriott is a major pornographer. And even though he may have fought it, everyone on that board is a hypocrite for presenting themselves as family values when their hotels offer 70 different types of hardcore pornography," said Phil Burress, president of Citizens for Community Values, an anti-pornography group based on Ohio.
Tony Perkins, president of the Family Research Council, a leading conservative group in Washington, said: "They have to assume some responsibility. It's their hotels, it's their television sets."
For the full article see: http://www.365gay.com/Newscon07/07/070507romney.htm
Posted by Michael-in-Norfolk at Thursday, July 05, 2007

it's the demand of their customers and their legal responsibility to shareholders.

Are we next going to say that Marriott hotels are hypocritical for serving coffee as well? (caffeine is not allowed by the Mormon faith either)?