Terror experts are confounded by the unusual profiles of those arrested in the British plots. Is there an Iraqi connection? 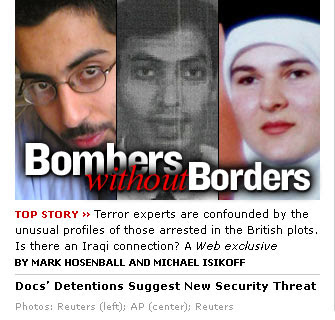 I believe most of us are waiting to get concrete answers to this question. Here is some of Newsweek's most recent coverage:
U.S. and British authorities are looking into the possibility that one or more of the medical workers arrested in the failed attacks may have had contact with Al Qaeda in Iraq, formed after the 2003 invasion of Iraq and loosely affiliated with Al Qaeda’s high command. An official familiar with the investigation said that no firm connection had yet been established between any of the suspects and the Iraq group, and there certainly is no evidence yet that it might have orchestrated the U.K. plot. But, said the official, there may be reason to suspect that those detained have been in touch with known associates of the ultra-violent insurgent group set up by Abu Mussab al-Zarqawi.
However, because the Iraq connection is so tentative at this stage, officials on both sides of the Atlantic remain skeptical that the U.K. plot was orchestrated by Al Qaeda’s top leaders. For a start, the bombings themselves were so thoroughly bungled that it’s seen as unlikely that Osama bin Laden or his main associates had any direct role. U.S. and British officials said it was still a possibility that the attacks were largely planned on British soil, even though it appears that few, if any of the plotters, fit the profile of the native-born, alienated British Muslims who have been implicated in other recent U.K. terror plots.
British and U.S. officials contacted by NEWSWEEK said investigators were still trying to figure out how the suspects in the plot—eight have now been arrested in the U.K. and Australia, and seven are believed to be doctors or medical students—got together to plan and carry out the failed bombings. A British official said it was possible all had somehow cooked up the plot before coming to Britain. But it is also possible they did not meet up until after all were in the country, where they appear to have had easy entrée to Britain’s medical education and nationalized health-care systems.
I again can only wonder how those in training to heal the sick and bring comfort to those suffering from disease can be set on a track to dispense death and destruction. If the motivation is in fact religious fanaticism, it will be most disturbing.
Posted by Michael-in-Norfolk at Tuesday, July 03, 2007

The Cult of the Suicide Bomber

Evict my people, we'll kill yours.