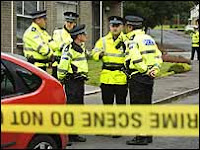 The BBC News story on the explosion/bomb incident at the Glasgow, Scotland airport yesterday(http://news.bbc.co.uk/2/hi/uk_news/6259354.stm) has yet to establish a clear tie to al -Qaeda, although one is suspected:
The prime minister told Andrew Marr on BBC One's Sunday AM it was "clear that we are dealing, in general terms, with people who are associated with al-Qaeda".
"It's obvious that we have a group of people - not just in this country, but round the world - who're prepared at any time to inflict what they want to be maximum damage on civilians, irrespective of the religion of these people who are killed or maimed are to be," Mr Brown said.
It will be interested to see whether the action was carried out by foreign nationals or UK residents/citizens. Obviously, in either case, the events demonstrate the dangers of extreme fundamentalist religion when combined with political actions. In the UK, as in America, the right to freedom of religion makes it much more difficult to stop the teaching of hatred and religious fanaticism. However, something needs to be done to reign in various versions of religious belief that instill (A) hatred towards others in their adherents and (B) the subversion of democratic government in favor of theocratic motivated rule.
In my view, this holds true whether the hate mongers are Muslim fundamentalists or supposed Christians. Hate and intolerance remain hate and intolerance, regardless of whether they are fomented by Christian fanatics like James Dobson or Muslim fanatics like Bin Laden. The right of freedom of religion of these nut cases must give way to the safety and civil rights of the rest of the citizenry.
Unfortunately, the last seven years under the Bush administration have made the threat from religious fanatics more serious. In the Middle East, the Iraq debacle has only made hatred towards the USA and its ill advised allies like the UK more intense. The evening news around the world showing cases the destruction and scores of civilian deaths in Iraq caused by Bush/Cheney hubris and insanity make more martyrs to be avenged daily. At home, we are faced with increased threats from theocrats and religious nuts jobs that have infiltrated both the executive branch of the government and the Supreme Court now under the misguidance of Justices Roberts and Alito, et al.
Posted by Michael-in-Norfolk at Sunday, July 01, 2007