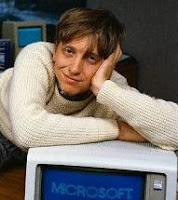 I guess the fundies are now going to have to boycott all companies with ownership interests held by Bill Gates or his affiliated entities based on this story from the UK's Independent (http://news.independent.co.uk/business/news/article2737151.ece):
SEC Filings reveal that Cascade Investment, the trust set up to invest Bill and Melinda Gates's billions, is among a group of investors that has bought a $26.2m (£13m) stake in PlanetOut, the gay lifestyle and publishing group behind Out magazine and Gay.com. Lifestyle and networking websites have exploded in the last few years, so it should not come as a surprise to see Mr Gates investing his money in similar ventures.
The San Francisco-based PlanetOut, which provides a range of media and entertainment services to the gay, lesbian and transgender community, has been a public company since October 2004, but it has not performed well. Its shares listed at $9 and closed on Tuesday at $1.59, 15 per cent better on the back of the new investment.
PlanetOut will rank as one of Mr Gates's riskier investments. Last year, the company reported a $3.7m loss on revenue of $68.6m - a drop in the ocean in comparison to Mr Gates's wealth but a 93 per cent improvement on 2005 revenues. May's first quarter results made dismal reading - year-on-year revenue was lower and first quarter losses were $6.9m.
Posted by Michael-in-Norfolk at Thursday, July 05, 2007

Email ThisBlogThis!Share to TwitterShare to FacebookShare to Pinterest
Labels: Bill Gates, Planet Out

PlanetOut teetered on bankruptcy, which is where it belonged, before the Gates' philanthropy rescued it from its natural death.

It was widely reported it could not meet its May's payroll without an infusion of cash, sending pink slips and pink pistols firing. The media behemoth, akin to Murdoch's News Corp. was finally dead, the "end" of PO's M&A and dominance of the GLBT market, having bought nearly every niche it could (including Amsterdam's GayRomeo).

So, charitable of the Gates to keep another MONOPOLY alive. Yes, apparently it was their FOUNDATION that acted, compensating for Microsoft's equivocation of Gay Rights in Washington State's Legislature, when Microsoft bowed to the Religious Rights' pressure to abandon its "partner benefits."

When you're a monopoly, who cares what the RR thinks? The Gates, that's who. Oppose equal rights, equal employment opportunity, equal housing, backing Spokane's "closeted" mayor's self-loathing anti-homosexual crusade, because a Seattle Black Evangelical (assoc. with Haggard) targeted Microsoft for a nationwide boycott (MS employee's benefit packages were "sealed" regardless of the Gates).

Mayor West was exposed for his pederasty. The Seattle folk thought Redmond dastardly, but Redmond is the Gates' town. And Capital Hill Gays and Lesbians initiated their own boycott of Microsoft. But, when you are a monopoly, where do you go, other than INDIA, PAKISTAN, or ALABAMA? Who cares? GLBT are as easily duped as GWB's Justice Department, which dropped Clinton's anti-trust suit against Microsoft.

When Republicans reign, so does the Monopolies. And, to think, Madonna goes to Africa to save little black AIDS babies, while the Gates Foundation feeds the Duseberg denialists. All in another day at Redmond, WA.

At least, GLBT in Silicon Valley don't have such a capricious employer (nor would work for the fuck), besides he's cheap, his compensation packages pay for their estates, and now they'll invade Canada in order to "play country against country." Monopolies can do this sort of thing, and with GWB approving of the mess, why not take it to the bank before the next K-Street interest might invoke the Anti-Trust Sherman Act of 1890?

Greed, after all, is Greed. Meanwhile, back in San Francisco, we wait to bury PlanetOut along with Murdoch, if only the Gates played fair we would already have had the Requiem. Greedy capitalists and Bush have so much in common, but what will happen to the PlanetOut franchises? Oh, that's already been negotiated. The Gates will buy GLBT PO entertainment when it defaults, and then MICROSOFT will have the GLBT market by monopoly too.

That should drive down GLBT wages, less Gates send their labor to India, China, and Canada, too. I only wish Gates and Bush would take retirement in Shanghai, and leave the world of competition alive. Peas of a pod, as they say.