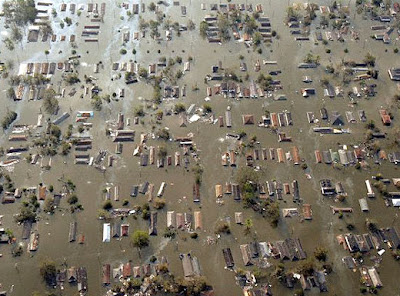 Since we are in the midst of hurricane season (June 1 through November 30), I wanted to recount an adventure Raymond and I had Labor Day weekend of 2005 in the wake of Hurricane Katrina. Having lived on the Gulf Coast and loving the City of New Orleans, in the aftermath of Katrina, Raymond and I were so so sick of watching the television images of Hurricane Katrina victims that Raymond felt we had to do something. Perhaps it was craziness in some ways, but what followed is a trip I will never forget.
Raymond began calling the Red Cross and various telephone numbers shown on TV seeking to find a way to bring some evacuees to live in our house and/or assist in getting back on their feet. Finally, he made contact with a woman in an office in Baton Rouge assisting evacuees. Through her, we had a contact and arranged to go to Baton Rouge to pick up people to come back to Norfolk. Thinking that we had firm plan in place, we rented a van and drove south, carrying extra tanks of gasoline (some given to us near the Alabama border by a Baptist Church team head back to Georgia) and slept in rest areas during the trip. We got as far as Jackson, Mississippi and hit a wall. Our contact who was supposed to meet us in Baton Rouge disappeared in the confusion generated by Chimperator Bush's PR visit to Baton Rouge the day we were to arrive.
Unable to confirm any arrangement, we were reluctant to drive another 120 miles each way to Baton Rouge where chaos was in full reign. Hence, we went to the Jackson Mississippi Coliseum where the Red Cross was warehousing evacuees like animals. Our volunteered assistance was turned down by the Red Cross because of "liability concerns." Next we headed northward to Meridian, Mississippi where a large Methodist Church had several hundred evacuees. We nearly had a family decide to go with us, but the father - who was a basket case - in the last resort wanted to stay in the false hope of being able to return to New Orleans.
Leaving Meridian, we finally stopped at a cute little restaurant called the Santa Fe Cafe in the tiny town Forrest, Mississippi, since we had not had a normal meal in several days. Upon being seated, the waitress immediately says to us "You boys aren't from around here, are you?" Thinking we were probably about to be beaten up or killed, we explained the basis for our quest. When the waitress told other employees, we soon had them all talking to us and we ended up with food - a fabulous southern style buffet - on the house. They refused to let us pay for anything. Anyone traveling from Meridian to Tuscaloosa should look up this restaurant, which is just off the interstate.
Finally, we wound up visiting a Red Cross relief event at the Talladega Speedway in Alabama. There, we met some evacuees who gave us the phone numbers of several evacuees stranded in Atlanta who were about to run out of hotel vouchers. We finally picked up seven evacuees in Atlanta - by chance all seven were gay - and drove back to Norfolk. Some of the members of our church, First Lutheran of Norfolk, began helping the evacuees with funds and support. One older couple took in three of the evacuees since nine people in our house was madness.
We and our evacuees were very frustrated—having faced adversity at every turn as they try to find jobs and housing in the area. It was a maze of bureaucratic red tape since day one. People have been very critical of New Orleans officials and they way they handled things, but from what I saw, the Norfolk area would be just as bad if it happened here this year at some point.
An account of our adventure was printed in the Virginia Lawyers Weekly which can be found here:http://www.virginialaw.com/subscriber/archives_FTS.cfm?page=VA/05/9260548.htm&recID=350101&QueryText=hamar. Without a doubt, I have to be one of the most out attorneys in the Commonwealth of Virginia after that September 2006 article.
Posted by Michael-in-Norfolk at Friday, July 06, 2007