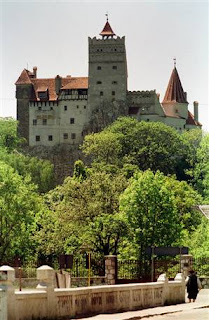 The price is $135,000,000. Perhaps Dick Cheney can use his Haliburton war profits to buy it. He and Count Vlad, the inspiration for Dracula, certainly seem to have some similar personality traits. Here's highlights of the MSNBC report:
The Bran Castle, perched on a cliff near Brasov in mountainous central Romania, is a top tourist attraction because of its ties to Prince Vlad the Impaler, the warlord whose cruelty inspired Bram Stoker’s 1897 novel, “Dracula.”

Bran Castle was built in the 14th century to serve as a fortress to protect against the invading Ottoman Turks. The royal family moved into the castle in the 1920s, living there until the communist regime confiscated it from Princess Ileana in 1948.
After being restored in the late 1980s and following the end of communist rule in Romania, it gained popularity as a tourist attraction known as “Dracula’s Castle.”
In May 2006, the castle was returned to Princess Ileana’s son, Archduke Dominic Habsburg.
Habsburg, a 69-year-old New York architect, pledged to keep it open as a museum until 2009 and offered to sell the castle last year to local authorities for $80 million, but the offer was rejected. Monday, he put the castle up for sale “to the right purchaser under the right circumstances,” said Michael Gardner, chief executive of Baytree Capital, the company representing Habsburg. “The Habsburgs are not in the business of managing a museum.”
Posted by Michael-in-Norfolk at Monday, July 02, 2007