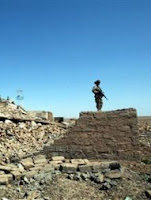 As the New York Times reports, more pigeons may be coming home to roost in countries involved with Chimperator Bush's quest for oil and religious crusade in Iraq.
GLASGOW, July 4 — In some ways, he was the unexceptional product of a privileged upbringing in an educated Baghdad family: an intelligent, pious young man who enjoyed swimming, hiking and socializing at the Iraqi capital’s exclusive Hunting Club. But associates of Bilal Abdulla, a doctor who is accused of riding a flaming Jeep into Glasgow’s international airport on Saturday, say he was a religious zealot and a lone wolf whose anger about political developments in Iraq may have driven him to an act of terrorism.

But Dr. Abdulla was different when he returned to the mosque about a year ago, Mr. Kwieder said. He had grown angry about the situation in Iraq and worried about his parents, friends and family, who he believed should flee the country. “When he was living in Cambridge, I think he was a sensible person, a normal person,” said Mr. Kwieder, who added that he was shocked when he saw Dr. Abdulla’s photograph on the front page of a newspaper.
Shiraz Maher, a former member of the radical group Hizb ut-Tahrir who knew Dr. Abdulla in Cambridge, painted a different picture. In an interview on BBC television broadcast Tuesday, he said: “He actively cheered the death of British and American troops. One of his best friends had been killed by Shias.”
The complete Times story can be seen here: http://www.nytimes.com/2007/07/05/world/europe/05abdullah.html?_r=2&oref=slogin&oref=slogin. This circumstance should underscore the dangers faced by the USA in its continued occupation of Iraq while a religious based civil war is raging. Saddam for all his cruelty and horror was the lid that kept this genie in the bottle. Now, Bush and regime have taken off the lid and the genie is spreading mayhem, mostly in Iraq, but the cloud is spreading.
Posted by Michael-in-Norfolk at Thursday, July 05, 2007