Out and Proud Parents and Families 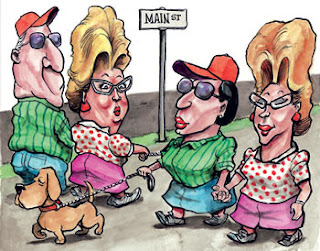 The Economist has a story that is good news for gays and that will no doubt cause the Bible thumpers palpitations (http://www.economist.com/world/na/displaystory.cfm?story_id=9409421) because it shows that the religious crazies are slowly losing the so-called culture war:
[T]wo sets of data suggest that America as a whole is becoming steadily more tolerant. First, opinion polls show that homophobia has receded . . . . As recently as 1982, only 34% of Americans thought homosexuality should be considered an acceptable alternative lifestyle. Now, 57% do. Since young Americans are far more relaxed about homosexuality than their elders—three-quarters of 18-34-year-olds think it is OK to be gay, whereas half of those over 55 think it is not—this trend is likely to continue. This year was also the first since Gallup started asking the question that a majority of Americans have not said that homosexual relations are morally wrong. And a hefty 89% think that gays should have equal rights in terms of job opportunities. If that strikes you as no big deal, recall that a total ban on gays working for the federal government was repealed only in 1975.
Second, and more subtly, one can look at demography. Gary Gates, a Californian academic, has been mining census data to determine where gays live in America. He observes several trends. First, the number of openly gay households is growing five times faster than the population as a whole. The last full census, in 2000, counted nearly 600,000 same-sex couples. Five years later, the American Community Survey (in which the Census Bureau quizzes a statistically representative sample of 1.4m households) estimated that that number had increased by 30%, to 777,000. Mr Gates reckons the bulk of the increase is because as tolerance spreads, more gay couples are willing to be counted.
The increase was most pronounced in the Midwest, with Wisconsin showing an 81% jump in the number of same-sex couples and Minnesota, Nebraska, Kansas, Ohio, Iowa, Missouri and Indiana also among the ten fastest-growing states in this respect. What this means, perhaps, is that gay America is becoming more like Middle America. “Much of the stereotype around gays is a stereotype of urban white gay men,” says Mr Gates. “The gay community is becoming less like that, and more like the population in general.”
How sad that James Dobson, Peter LaBarbera and other such bigots will have an increasingly difficult time trying to convince the general public that gays are all drug using, sexually promiscuous alcoholics and freaks in general. Once you go to PTA meetings, car pool and other such things with gay couples, only the most brain dead Christianists can believe the anti-gay lies. Hopefully, we are nearing the tipping point where perenial gay bashing will begin to actually lose the GOP large numbers of voters.
Posted by Michael-in-Norfolk at Sunday, July 01, 2007