The Coming Demise of Evangelicals as a Political Force 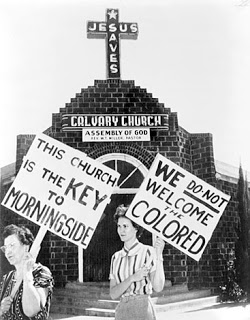 One of the continuing toxic poisons in American politics is, in my view, white evangelicals who seek to impose their reactionary and exclusionary views on all citizens.  Over the last decades, this toxic mindset has taken over the Republican Party and, when looks at the history of the evangelical movement, has made white supremacy a pillar of today's GOP.  The good news is that the political power of the white evangelicals may be about to plummet as younger evangelicals are walking away from what has become a partisan religious movement defined by hatred of others.  A piece in Newsweek looks at what is hopefully the beginning of the end of white evangelical political power, an end hastened in part by evangelicals' embrace of Donald Trump, a man who is the embodiment of everything a true Christian should oppose and find abhorrent. Here are article highlights:


Alex Camire left the church a few months before his pastor announced from the pulpit that the election of Donald Trump was “a miracle of the Lord.”

The 29-year-old Connecticut social worker had been raised in the evangelical tradition; his parents were married in it. But Camire’s faith had started to fail a decade earlier when his church deemed his mother’s alcoholism—and his parents’ subsequent divorce—a sin. Later, a secular college education taught him that “the world”—the community outside the church—wasn’t going to drag him into a cesspool of sex and drugs, as he’d been taught from childhood. His pastor’s outspoken support of Trump convinced him he’d made the right decision.

Californian Jason Desautels similarly began to doubt his faith as a teen. In the week after the Oklahoma City bombing, his church’s minister railed against “sand people” and Muslims. “When it came out that the bomber was a white nationalist, he didn’t apologize or even say anything,” Desautels recalls. “And the adults seemed to be all fine with it. That planted the seed.”

Later, as an Army infantryman in Iraq, Desautels, now 39, moved further from the church. “I was in the land of Father Abraham,” he says. “I had this weird spiritual moment when I realized that these families had lived in this neighborhood for longer than America had been a nation, and here we were telling them what to do.” He cut ties completely with his church after his sister came out as gay and felt she had to apologize to their parents.

Blake Chastain, 35, entered Indiana Wesleyan University the week of 9/11, with hopes of graduating from the seminary. Instead, he began to fall away from the church when he couldn’t reconcile what he was learning in Bible study with his professor’s support for the Iraq War. “Conservative Christianity,” he says, “was at odds with the teachings in the Bible.”

All three men are on the front lines of a growing movement among millennials that is reshaping the evangelical church and the nation’s political landscape. Since the 1970s, white evangelicals have formed the backbone of the Republican base. But as younger members reject the vitriolic partisanship of the Trump era and leave the church, that base is getting smaller and older. The numbers are stark: Twenty years ago, just 46 percent of white evangelical Protestants were older than 50; now, 62 percent are above 50. The median age of white evangelicals is 55. Only 10 percent of Americans under 30 identify as white evangelicals. The exodus of youth is so swift that demographers now predict that evangelicals will likely cease being a major political force in presidential elections by 2024.

To be sure, evangelical Christians have been rewarded for their support of Trump after enduring eight years wandering in Barack Obama’s political desert. They have two new conservative Supreme Court justices, and there have been nine self-professed evangelical Cabinet members, plus a flurry of laws and executive orders clamping down on gender roles, abortion and LGBTQ rights. But experts say this may represent the last bounty for a waning political power. Unlike their parents, the younger generation is not animated by the culture wars; many are pushing for social justice for migrants and LGBTQ people and campaigning against mass incarceration—positions more in line with the Democratic Party.

The result is a shrinking conservative bloc, something that could weaken white Christian political power—and, consequently, a Republican Party that has staked its future on its alliance with the religious right. It’s a conundrum that the father of modern GOP conservatism, Barry Goldwater, predicted in 1994: “Mark my word, if and when these preachers get control of the party, and they’re sure trying to do so, it’s going to be a terrible damn problem.”

The association of the religious right and the Republican Party has its roots in the 1954 Supreme Court ruling Brown vs. the Board of Education of Topeka, after which white Southerners began to flee public schools following forced desegregation. They opened so-called segregation academies: religious schools that were tax-exempt. When the IRS came after evangelical colleges like Bob Jones University, which officially prohibited interracial dating, the schools were faced with losing their tax-exempt status.

That would have meant financial doom. But a Republican activist named Paul Weyrich—with patronage from Western segregationist beer billionaire Joseph Coors—forged alliances with Southern religious leaders like Jerry Falwell and successfully lobbied to soften IRS enforcement. . . . Republican strategists used the issues of abortion and gay marriage to cement the union and drive right-leaning Christians into the voting booth.

But demographic trends are steadily diluting their outsize clout. Researcher Robert Jones, author of The End of White Christian America, has tracked what he calls a “stair-steps downward trajectory of white Christian presence in the electorate.” In 1992, when Bill Clinton was elected, 73 percent of the electorate was white and Christian. By 2012, that number was 53 percent. “If current trends hold steady, 2024 will be a watershed year—the first American election in which white Christian voters do not constitute a majority of voters,” Jones, who heads the Public Religion Research Institute (PRRI), tells Newsweek.

[T]heir ranks are now dwindling, driven largely by the youth exodus. According to Jones, white evangelicals constituted 21 percent of the U.S. population when Obama was elected in 2008. Eight years later, in 2016, that number dropped to 17 percent. Today, they make up 15 percent of Americans.

For an analogy, he uses Elisabeth Kübler-Ross’s landmark “stages of grief” experienced by the dying and their loved ones to describe what’s happening to evangelicals and American politics. First comes denial, then anger, followed by bargaining, depression and acceptance.

“We are past denial. People see the writing on the wall in terms of demographic change. And that is also why we see immigration taking over and becoming the flagship issue. That and a wall symbolize the resistance to this demographic change,” Jones says. “I think we are somewhere between anger and bargaining. And in many ways, this shotgun marriage between Trump and white evangelicals happened under some duress and is a desperate bargain that you make at the end of life. That is what we’re really seeing here.”

To understand what’s happening among evangelicals, researchers study the results of PRRI’s annual, wide-ranging, 80,000-interview American Values Atlas poll. In the most recent survey, from 2017, 40 percent of individuals under 30 claim “no religious affiliation” (sometimes called “the nones”). “White evangelicals are a big part of that decline,” Jones says. . . . “They cite partisanship,” Jones says. “That’s a big turnoff for young Americans. And so is negative treatment of gay and lesbian people.”

Polls find that upward of 80 percent of young people now support same-sex marriage. That number includes young Republicans and evangelicals under 30. . . . Some major evangelical leaders and thinkers, not surprisingly, reject this assessment.

Christopher Maloney, 32, was raised evangelical, stepped away from his faith and has released a documentary film on the exvangelical movement called In God We Trump. He disagrees with Moore that young evangelicals like him will come back to the fold.

“People around my age and younger were already deconstructing their evangelical faith in large numbers before Trump came along,” he says. “What the 2016 election did was accelerate what was already happening. We had begun edging toward the doors, and when evangelicals embraced Trump we bolted outside. To be honest, I don’t see a return of younger generations to the church as we know it.”

They aren’t interested, he says, in going to a central place to worship anymore, particularly when those fellow churchgoers are Trump supporters. “Millennials largely live by Christian ethics without any formal doctrine or dogma,” he says. “We just don’t need a religious structure to tell us how to be kind to one another.”

The disaffected ranks include women like Dawne Marx, a 53-year-old Texas mother of five, who walked away from her church community in 2016 after decades of voting with the evangelical fold. “I was a single-issue voter, a pro-life voter,” she tells Newsweek. “It was so nice and tidy. I didn’t have to think about anything else.”

Then she saw the images of family separations at the Mexican border and listened as the president casually dismissed the Saudi killing of journalist Jamal Khashoggi:

“All of a sudden there is Trump. And children wrapped up in aluminum blankets in cages and this crass, crude man, on a daily basis, saying things like, ‘OK, so a journalist got chopped up.’ And he’s saying, ‘We have a $100 billion contract, and there are a lot of jobs on the line.’ It’s like: They chopped somebody up!”


As one of the individuals in the article correctly noted, conservative Christianity is at odds with the teachings in the Bible.  It has become the home of modern day Pharisees who are the antithesis of what Christians should be. It deserves to die.
Posted by Michael-in-Norfolk at Sunday, December 16, 2018