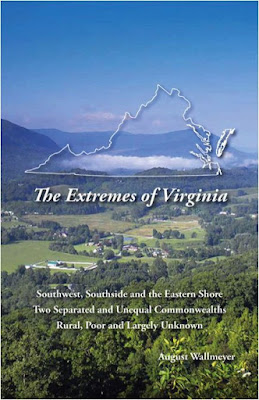 A lengthy piece in the New York Times looks at an issue plaguing large swaths of the country, including Southwest Virginia and Virginia's "Southside": economic decline in rural areas that seems impossible to reverse.  The piece looks at economic forces, especially the synergy of urban tech centers that works against rural areas, population decline and lower academic achievement that afflict many rural areas.  Here in Virginia, the economic mantra coming from the Northam administration is "all welcoming," yet in Southwest Virginia, the motto is seemingly "only white conservative Christians need apply."  All of the causation enumerated in the article are true, but nowhere are experts willing to call out what to me is another major cause of rural decline: right wing, hate based religion and an often too willing embrace of ignorance.  Progressive businesses want the best and brightest employees and care little about race, sexual orientation or religious belief - a mindset that is the opposite of what finds in Southwest Virginia. Here are article highlights:


Can rural America be saved?  There are 60 million people, almost one in five Americans, living on farms, in hamlets and in small towns across the landscape. For the last quarter century the story of these places has been one of relentless economic decline.

The election of Donald Trump, powered in no small degree by rural voters, has brought the troubles of small-town America to national attention, with an urgent question: What can be done to revive it?

Rural America is getting old. The median age is 43, seven years older than city dwellers. Its productivity, defined as output per worker, is lower than urban America’s. Its families have lower incomes. And its share of the population is shrinking: the United States has grown by 75 million people since 1990, but this has mostly occurred in cities and suburbs. Rural areas have lost some 3 million people.

These days, economic growth bypasses rural economies. In the first four years of the recovery after the 2008 recession, counties with fewer than 100,000 people lost 17,500 businesses, according to the Economic Innovation Group. By contrast, counties with more than 1 million residents added, altogether, 99,000 firms. By 2017, the largest metropolitan areas had almost 10 percent more jobs than they did at the start of the financial crisis. Rural areas still had fewer.

The Economic Innovation Group measures “distress” as a combination of data ranging from joblessness and poverty to abandoned homes and educational attainment. Since the 1990s, there has been an “intensifying ruralization of distress,” said John Lettieri, the group’s president.

[N]obody — not experts or policymakers or people in these communities — seems to know quite how to pick rural America up. States, municipalities and the federal government have spent billions to draw jobs and prosperity to stagnant rural areas. But they haven’t yet figured out how to hitch this vast swath of the country to the tech-heavy economy that is flourishing in America’s cities.

[F]actory jobs can no longer keep small-town America afloat. Even after a robust eight-year growth spell, there are fewer than 13 million workers in manufacturing across the entire economy. Robots and workers in China put together most of the manufactured goods that Americans buy, and the high-tech industries powering the economy today don’t have much need for the cheap labor that rural communities contributed to America’s industrial past. They mostly need highly educated workers. They find those most easily in big cities, not in small towns.

In a report published in November, Mark Muro, William Galston and Clara Hendrickson of the Brookings Institution laid out a portfolio of ideas to rescue the substantial swath of the country that they identify as “left behind.” They identify critical shortages bedeviling declining communities: workers with digital skills, broadband connections, capital. And they have plans to address them: I.T. training and education initiatives, regulatory changes to boost lending to small businesses, incentives to invest in broadband.

Wisely, they suggest that any federal government effort must choose its targets carefully. Better to focus on middle-sized places that are near big tech hubs and have some critical infrastructure, rather than scatter assistance all over the landscape. . . . . however, even the authors concede that they may not be up to the task. “I don’t know if these ideas are going to work,” Mr. Galston acknowledged when I pressed him on the issue. “But it is worth making the effort.”

This is the inescapable reality of agglomeration, one of the most powerful forces shaping the American economy over the last three decades. Innovative companies choose to locate where other successful, innovative companies are. That’s where they can find lots of highly skilled workers. . . . . This dynamic feeds on itself, drawing more high-tech firms and highly skilled workers to where they already are.

In hindsight, no amount of tax incentives would have convinced Amazon to expand in a medium-sized city such as Columbus, Ohio, rather than Northern Virginia and Queens,which sit in some of the largest pools of talent in the country. If even medium-sized cities find it difficult to compete, what are the odds that, say, a small town like Amory, Miss., where 14 percent of adults have a bachelor’s degree and a quarter of its 2,500 workers work in small-scale manufacturing, have a chance to attract well-paid tech jobs?

What if nothing really works? Is there really no option but to do nothing and, as some have suggested, return depopulated parts of rural America to the bison?

Instead of so-called place-based policies to revitalize small towns, why not help their residents take advantage of opportunities where the opportunities are? Geographic mobility hit a historical low in 2017, when only 11 percent of Americans picked up shop and moved — half the rate of 1951. One of the key reasons is that housing in the prosperous cities that offer the most opportunities has become too expensive.

[T]he costs of rural poverty are looming over American society. Think of the opioid addiction taking over rural America, of the spike in crime, of the wasted human resources in places where only a third of adults hold a job.

And if today’s polarized politics are noxious, what might they look like in a country perpetually divided between diverse, prosperous liberal cities and a largely white rural America in decline? As Mr. Galston warned: “Think through the political consequences of saying to a substantial portion of Americans, which is even more substantial in political terms, ‘We think you’re toast.’ ”

The distress of 50 million Americans should concern everyone. Powerful economic forces are arrayed against rural America and, so far, efforts to turn it around have failed. Not every small town can be a tech hub, nor should it be. But that can’t be the only answer.

The irony, of course, is that the funds used by state and federal programs trying to revitalize rural areas come from the the diverse urban areas and the very people that so many rural voters view with contempt or worse.
Posted by Michael-in-Norfolk at Sunday, December 16, 2018