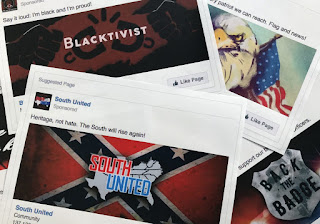 Even as Der Trumpenführer continues to rant (and likely lie - a view held by 62% of Americans) that there was no collusion between his campaign and Russian operatives, a new bipartisan study set to be released by the U.S. Senate Intelligence Committee shows the massive scale of Russian efforts to see Trump elected in 2016.  The efforts used every aspect of social media and sought to stir up "conservatives" - I'd call them racists and religious extremists - and to depress the vote of likely anti-Trump voters.  Countless individuals on the right (many of whom view themselves as "real Americans" and patriots) were duped into sharing Russian originated posts and links and, in effect worked as unwitting agents of Russian intelligence who played their prejudices and bigotry like a fine violin. A piece in the Washington Post looks at the report.  Here are excerpts:

A report prepared for the Senate that provides the most sweeping analysis yet of Russia’s disinformation campaign around the 2016 election found the operation used every major social media platform to deliver words, images and videos tailored to voters’ interests to help elect President Trump — and worked even harder to support him while in office.

The report, a draft of which was obtained by The Washington Post, is the first to study the millions of posts provided by major technology firms to the Senate Intelligence Committee, led by Sen. Richard Burr (R-N.C.), its chairman, and Sen. Mark Warner (Va.), its ranking Democrat. The bipartisan panel hasn’t said whether it endorses the findings. It plans to release it publicly along with another study later this week.

The data sets used by the researchers were provided by Facebook, Twitter and Google and covered several years up to mid-2017, when the social media companies cracked down on the known Russian accounts.

“What is clear is that all of the messaging clearly sought to benefit the Republican Party — and specifically Donald Trump,” the report says. “Trump is mentioned most in campaigns targeting conservatives and right-wing voters, where the messaging encouraged these groups to support his campaign. The main groups that could challenge Trump were then provided messaging that sought to confuse, distract and ultimately discourage members from voting.”

Democrats and Republicans on the panel previously studied the U.S. intelligence community’s 2017 finding that Moscow aimed to assist Trump, and in July, they said investigators had come to the correct conclusion.

The Russians aimed particular energy at activating conservatives on issues such as gun rights and immigration, while sapping the political clout of left-leaning African American voters by undermining their faith in elections and spreading misleading information about how to vote. Many other groups — Latinos, Muslims, Christians, gay men and women, liberals, Southerners, veterans — got at least some attention from Russians operating thousands of social media accounts.

The authors, while reliant on data provided by technology companies, also highlighted the companies' “belated and uncoordinated response” to the disinformation campaign and, once it was discovered, their failure to share more with investigators.

The report expressed concern about the overall threat social media poses to political discourse within nations and among them, warning that companies once viewed as tools for liberation in the Arab world and elsewhere are now threats to democracy. . . . “Social media have gone from being the natural infrastructure for sharing collective grievances and coordinating civic engagement to being a computational tool for social control, manipulated by canny political consultants and available to politicians in democracies and dictatorships alike,” the report said.

Researchers also noted that the data includes evidence of sloppiness by the Russians that could have led to earlier detection, including the use of Russia’s currency, the ruble, to buy ads and Russian phone numbers for contact information. The operatives also left behind technical signatures in computerized logs, such as Internet addresses in St. Petersburg, where the IRA was based.

Facebook was particularly effective at targeting conservatives and African Americans, the report found. More than 99 percent of all engagement — meaning likes, shares and other reactions — came from 20 Facebook pages controlled by the IRA [a Russian intelligence agency], including “Being Patriotic,” “Heart of Texas,” “Blacktivist” and “Army of Jesus.”

Posted by Michael-in-Norfolk at Monday, December 17, 2018