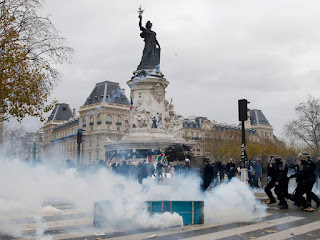 One constant throughout history is that change over time is guaranteed and that changes in technology and industry are constant, often at the expense of many classes of people who find their economic world turned upside down as industries and economic ways of life they thought unchangeable begin to die and wither away.  The resulting angst and financial distress are causing convulsions across the developed world, especially in rural areas that have not embraced and/or been able to change see their social and economic reality crumble.  The first glimpse of the danger posed by the phenomenon was the British Brexit vote that was sold to many on the deliberate lie that the exit from the European Union would allow the recapture of a glorious past.  The reality is that Brexit will constitute a form of economic suicide for many Britons, especially those in rural areas.  Next we saw the convulsion in the United States that put the thoroughly corrupt and unfit Donald Trump in the White House.  Now, we are seeing convulsions in France where those left out of the new economic model are violently protesting.  I totally understand the fear and anxiety of those reacting to change, but trying to resist the inevitable is not the answer and, indeed, threatens long term economic and political stability - and sets the stage for dangerous demagogues - as a column in the New York Times notes.  Here are excerpts:

Ever since World War II, the liberal global order that has spread more freedom and prosperity around the world than at any other time in history has been held up by two pillars: the United States of America and the United Nations of Europe, now known as the European Union.

Both of these centers of free markets, free people and free ideas are being shaken today by rural and beyond-the-suburbs insurgencies of largely white working-poor and anxious middle classes, which have not generally benefited from the surges in globalization, immigration and technology that have lifted superstar cities like London, Paris and San Francisco and their multicultural populations.

Having just seen the shocking sight of Parisian stores boarded up right before Christmas to protect against rioting along the Champs-Élysées by some of France’s yellow-vested protesters; after being told in Rome a few days earlier that Italy, a founding member of the E.U., could conceivably shuck off both the E.U. and the euro one day under its new bizarre far-left/far-right governing coalition; after watching Britain become paralyzed over how to commit economic suicide by leaving the E.U.; and after watching President Trump actually cheer for the breakup of the E.U. rather than for its good health, it is obvious to me that we’re at a critical hinge of history.

The core challenge for both the U.S. and the E.U. is the same: These rapid accelerations in technology and globalization have brought many more immigrants into many more remote corners of their societies — public housing in Paris today is dominated by immigrants — at the same time as many long-frozen social mores have changed — like acceptance of gay marriage and transgender rights — and as average work no longer returns an average wage that can sustain an average middle-class lifestyle.

The middle classes that powered the growth of the U.S. and the E.U. in the 20th century were built on something called a “high-wage, middle-skilled job.” But robotics and artificial intelligence and outsourcing and Chinese imports have wiped out a lot of middle-skilled routine white-collar and blue-collar work.

Now there are high-wage, high-skilled jobs and low-wage, low-skilled jobs. But high-wage, middle-skilled jobs are vanishing, leaving a considerable cohort of people with stagnant incomes and burning resentments at the globalized city slickers who they think look down at them and have mastered the nonroutine skills required for a high-wage job today.

When you simultaneously challenge all these things that anchor people — their sense of home, their job security, their prospects for growth and the social norms that, for better or worse, defined their lives — and then amp it all up with social networks, you can get a really ferocious blowback, as France’s president, Emmanuel Macron, saw across his country.

It is going to take extraordinary leadership for the U.S., Britain and the E.U. to come up with a strategy for these grievances.

It has to balance the need for economic growth and redistribution, the need to take care of those who have been left behind without burdening future generations, the need for free-flowing borders to attract new talent and ideas, and the need to prevent people from feeling like strangers in their own homes.

But that leadership is not present. I get why a slim majority of U.K. citizens voted for Brexit — as it was sold to them. They were told they could curb all the stuff they didn’t like — such as a flood of 2.2 million foreign E.U. workers — and still keep all the stuff they liked — mainly Britain’s free access to the E.U. market — and give up nothing. But it was all a lie.

And to now watch the Conservative Party hacks who pushed that lie, led by Boris Johnson, continue to demand that their prime minister deliver this fantasy Brexit in the face of the reality that it’s impossible — and in the face of how bad even the second-best option will be — is to watch a once-sane country write a suicide note in a moment of irrationality and then argue endlessly over how to carry it out — death by hanging, poison or a gunshot to the head. They’ve got to reconsider. Disconnecting in a connected world is nuts.

Macron pushed through four vital structural fixes that fostered growth: pro-investment tax reforms, reduced pensions for the bloated railway union, relaxed labor rules to make it easier to fire and hire workers, and big new public investments in skills and education for the most disadvantaged.

To save his presidency, a shellshocked Macron busted his budget and canceled the fuel tax hike, raised the minimum wage by 100 euros ($114) a month and scrapped a planned tax on pensions under 2,000 euro ($2,272) per month. But because the Yellow Vests have no leader, no one knows what happens next.


“France today has a leader with no followers and an opposition with no leader,” said U.S. foreign policy expert Michael Mandelbaum.

And the reason that matters is France and Germany were always the two adults whose partnership and adherence to the E.U. budgets and standards were the cement that held the whole E.U. pillar together.

I think the countries that will thrive in this era are the ones that have the most nimble cities, with the most nimble local leaders, who build adaptive coalitions of businesses, educators and social entrepreneurs, who can compete locally, regionally, nationally and globally.

In this world, highly centralized countries will fare much worse than decentralized ones. That’s the real shift France has to make, and, if it can’t, watch out for falling pillars. France matters.

Dominique Moïsi, one of France’s top foreign policy analysts, put it to me like this: At a time when America, which was always the European Union’s life insurance policy against predatory threats from the East and was the world champion of democracy, begins to withdraw from the world; when Russia returns with a vengeance to global politics; when Germany turns inward and Italy rebels against E.U. spending limits and moves closer to autocratic Russia; when so many roads now lead to Beijing; and when the U.K. is hellbent on suicide, “suddenly what happens in France goes beyond France. We are the last barrier protecting the European idea. If Macron fails, it can bring the end of Europe.”

Frighteningly, lurking among those feeling dispossessed is the same sort of nationalism and xenophobia that gave rise to WWI and WWII.  All that is lacking for now is a dangerous demagogue ready to light the fuse.
Posted by Michael-in-Norfolk at Wednesday, December 19, 2018