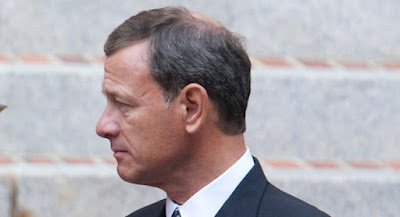 s noted in a previous post, anti-gay, pro-Christofascist and general right wing ideologue U. S. District Court Judge Reed O'Connor (a GOP appointee) issued a ruling striking down the Affordable Health Care Act.  Numerous legal experts excoriated O'Connor's ruling and a number of state attorney generals, including Virginia Attorney General Mark Herring, have made it clear that they will oppose O'Connor's ruling.  While it is easy to blame the ruling out of Texas on O'Connor's general extremism and constant placement of Republican partisanship over the rule of law, a piece in The Atlantic lays part of the blame on Chief Justice John Roberts and his ill advised refusal to uphold Obamacare under the Commerce Clause of the U.S. Constitution and instead base his pro-Obamacare ruling on the power of taxation. With healthcare spending comprising nearly 20% of the U.S. economy and equating to roughly $10,739 per person for every American, it is ludicrous for Roberts to have pretended that healthcare was outside the scope of the Commerce Clause.  Admittedly, this is possibly viewed by many as a "nerdy lawyer analysis and hairsplitting," but it is important.  Here are article highlights:

Friday’s decision striking down the Affordable Care Act, Texas v. United States, is wrong and should be reversed on appeal for reasons ably explained by its many critics. Yet in focusing their wrath on the Texas decision, the critics overlook the fact that Chief Justice John Roberts put us in this mess by making a bad choice in the Supreme Court’s 2012 decision upholding Obamacare, NFIB v. Sebelius. Roberts erred—and opened the door to the Texas debacle—by failing to follow a famous and well-established 200-year-old precedent set by Chief Justice John Marshall.

Joining the four conservatives, Roberts maintained that the mandate could not be sustained as an exercise of Congress’s power to regulate interstate commerce. But he joined the four liberals to uphold the mandate under the taxing power.

Congress’s 2017 move to eliminate the tax on nonpurchasers of health insurance gave rise to the theory that the legal foundation for the individual mandate had thereby disappeared, and that therefore the whole law should go down, too. So ruled the judge in Texas v. United States. The argument is nonsensical, because without the tax, there is no mandate: People are free to decline health insurance with no legal consequence. But the argument would not even exist if Roberts had voted to uphold the mandate as an exercise of the commerce power.

The constitutional challenges to Obamacare harken back to the first great debate over the powers of Congress. In 1791, then–Treasury Secretary Alexander Hamilton proposed establishing a national bank to act as financier to the federal government. Congressional opponents objected that the Constitution gave no express power to create a national bank. Supporters responded that Congress necessarily possessed implied powers to effectuate those specifically enumerated in the Constitution.

Late in the debate, Congressman James Madison offered a novel constitutional theory against the bank bill. Yes, there were implied powers, he conceded, but those could reach only minor matters and could not extend to “great, substantive, and independent” objects, no matter how useful to implementing the enumerated powers. Creating a national bank fell into this latter “great powers” category.

Madison’s argument was voted down by a two-thirds House majority. Congress passed the bank bill, and President George Washington signed it into law.

This victory for implied congressional powers was confirmed by the Supreme Court three decades later, when states’ rights advocates challenged the constitutionality of the Second Bank of the United States, chartered by Congress to succeed Hamilton’s bank in 1816—at the request of President James Madison. In the celebrated 1819 case of McCulloch v. Maryland, Marshall upheld the constitutionality of the second bank. Although the Constitution did not expressly authorize Congress to create banks, Marshall concluded that under the Necessary and Proper Clause, Congress may enact any legislation that is “conducive,” “convenient,” “useful,” or “plainly adapted” to implementing an enumerated power.

In the 2012 Obamacare decision, Roberts could have joined the four liberals to uphold the individual mandate under the Commerce Clause power “to regulate commerce … among the several states.” Individuals who choose not to purchase health insurance may or may not be engaged in interstate commerce. But if an individual mandate to purchase health insurance is useful for effective regulation of the interstate health-care market, Congress has the implied power to enact it, according to Marshall’s theory in McCulloch.

Instead, Roberts joined the four conservative justices to define “commerce” as “economic activity,” and to conclude that the Commerce Clause does not permit Congress to regulate the “inactivity” of someone’s refusal to buy health insurance. Relying on Madison’s 1791 House speech, Roberts argued that regulating the “inactivity” of refusing to buy health insurance is “a great, substantive, and independent power” that cannot be implied, no matter how effective it might be in regulating the national health-care market.

Yet in McCulloch, Marshall had rejected this very contention. Marshall stated that no exercise of power could be deemed “great, substantive, and independent” if it was being used as a means to an end that falls within the enumerated powers. The individual mandate’s requirement to join the health-insurance pool is no end in itself, but rather a means to the plainly constitutional end of regulating the interstate market in health care.

Madison’s half-baked argument against implied powers never got off the ground. It was rejected by Congress and President Washington in 1791, and by the Supreme Court in 1819. Before Roberts resurrected it in 2012, it had not entered American constitutional jurisprudence. And for good reason: It doesn’t work. The bank, the military draft, and countless other federal laws belie the notion that the Constitution prohibits implied “great” powers. And if the draft can be implied, surely the individual mandate can be, too.

The Texas decision can easily be overturned, and Obamacare upheld, without Roberts revisiting his ill-fated choice of Madison over Marshall. But the Texas case highlights just why he should have sided with the long-standing precedent set by the Great Chief Justice, not the twice-rejected, eccentric argument of a flip-flopping congressman.

Posted by Michael-in-Norfolk at Tuesday, December 18, 2018

The repugs have the dubious distinction of being absolutely predictable in their corruption.