The Pervasiveness of White Racial Resentment and GOP Race Baiting 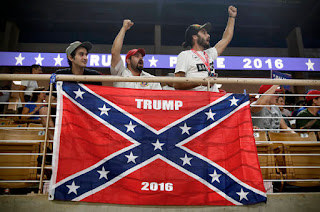 A lengthy column in the New York Times looks at studies and surveys on one of America's most persistent social and political problem: white racism and white resentment, two undercurrents that Donald Trump inflamed to edge out Hilary Clinton in 2016 by roughly 70,000 votes spread across three states to gain an Electoral College win despite losing the popular vote by three million votes.  The column also looks at the insidious way the GOP continues to play the race card by pandering to racial fears that are unfounded when looks at real facts and figures as opposed to GOP sound bites and dog whistle messaging.  Personally, I do not comprehend the anxiety far too many whites hold toward those who are deemed "other."  Perhaps this is a result of living in a city where whites are a minority yet suffer no loss of privilege or standing or perhaps it's due to my being part of a minority group hated by many of the same people who hate blacks: white conservative Christians who in surveys admitted their racial animosity and exposed the lie to the claim they support Christian values.  Here are column highlights (note the white fear that others may some day threat whites as they have long treated minorities):


For 50 years Republicans have battered the Democratic coalition, wielding the so-called southern strategy — built on racism and overlaid with opposition to immigration — to win control of the White House and one or both chambers of Congress.

As the Democratic Party has evolved from an overwhelmingly white party to a party with a huge minority base, the dominant strategic problem has become the tenuous balance between the priorities of its now equally indispensable white and minority wings.The frontal attack Trump has engineered — in part by stigmatizing “political correctness” — has had a dual effect, throwing Democrats back on their heels while simultaneously whetting their appetite for a fight. . . . . For Democrats to counter Trump effectively, a number of scholars believe it is essential to understand the motivations — the needs, beliefs and agendas — of those whites who have moved into the Trump camp.In her forthcoming book, “White Identity Politics,” Ashley Jardina, a political scientist at Duke, describes three groups of whites who generally fall on the right side of the political spectrum.

The second group comprises those who rank high on a test of “white consciousness.” . . . The difference between white identity and white consciousness, Jardina argues, is that those in the latter category believe that “many whites are unable to find jobs because employers are hiring minorities.” Jardina reports that they also stress “the importance of whites working together to change laws that are unfair to whites.”

Jardina argues in her book that the racial resentment scale reveals a new type of racial prejudice — one that is a subtle combination of anti-black affect and the belief that blacks do not adhere to traditional American values associated with the Protestant work ethic.

Jardina, whose work I have written about before, agrees that “some of this backlash” — including the election of Donald Trump and the opposition to immigration — “is rooted in prejudice, racism, and ethnocentrism.”

But, she adds, many whites’ reactions to our country’s changing racial landscape do not simply manifest in outward hostility. Amidst these changes, many whites have described themselves as outnumbered, disadvantaged, and even oppressed. They have voiced their anxiety over America’s waning numerical majority, and have questioned what this means for the future of the nation. They have worried that soon they may face discrimination based on their own race, if they do not already.

Such fears, in Jardina’s view, drive the emergence of white identity as a political issue: . . . They have led a sizable proportion of whites to believe that their racial group, and the benefits that group enjoys, are endangered.

The result?  This racial solidarity now plays a central role in the way many whites orient themselves to the political and social world. . . . . these whites feel, to some extent, that the rug is being pulled out from under them — that the benefits they have enjoyed because of their race, their groups’ advantages, and their status atop the racial hierarchy are all in jeopardy.

[These] whites, to a certain extent, are deliberately claiming victimhood:  White identifiers have co-opted the language of racial discrimination and oppression. Put bluntly, the politics of white identity is marked by an insidious illusion, one in which whites claim their group experiences discrimination in an effort to reinforce and maintain a system of racial inequality where whites are the dominant group with the lion’s share of power and privileges.

Eric Kaufmann, in his forthcoming book “Whiteshift: Populism, Immigration, and the Future of White Majorities,” addresses similar racial and ethnic tensions. . . . Kaufmann argues that there is a structural dilemma posed by the multiracial nature of the left coalition: he views what he calls “the institutionalization of multiculturalism/diversity/equity” and of “high immigration” as fueling the rightward direction of recent political movements in the United States and Europe. He believes that it would benefit progressive groups, “in the interests of harmony,” for liberals to “argue their case for diversity” but that they should “tolerate difference of opinion and accept compromise.”

Lynn Vavreck — a political scientist at U.C.L.A. and one of the authors of one of the most influential books on the 2016 election, “Identity Crisis: The 2016 Presidential Campaign and the Battle for the Meaning of America” — is also looking at the recent rightward drift in the United States. She believes that developments in contemporary politics are not in any sense racially neutral but instead amount to “hostility or fear of outgroups.”

They surveyed 22,500 people in France, Germany, Italy, Sweden, Britain and the United States and found that respondents greatly overestimate the total number of immigrants, think immigrants are culturally and religiously more distant from them, and are economically weaker — less educated, more unemployed, poorer, and more reliant on government transfers — than is the case.

In other words, pro-immigration, pro-diversity Democrats face clear obstacles breaking the Republican hold on white voters — and a challenge in repelling Trump’s race-and-immigration-focused offensive. Still, the accumulating insights on how and where Republicans have successfully worked these levers may help demonstrate — as President Barack Obama, President Bill Clinton and the results of this year’s midterm elections prove — that these obstacles are not insuperable and that they can be overcome.

The article suggest that white Trump voters need to do some real soul searching and admit that they may are motivated by prejudice or worse.
Posted by Michael-in-Norfolk at Thursday, December 20, 2018

....and that will never happen. Trumpanzees will never accept their racist ways. Ever. Cheeto will exploit that for all its worth.

John, thanks for reading the blog!!