Trump Propels the Government and Markets into Crisis 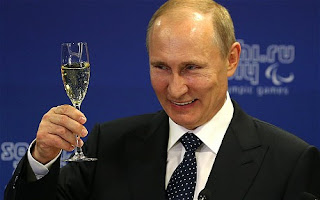 The image above must be how Vladimir Putin looks today in Moscow: a big grin as America lurches into crisis at the hands of Putin's operative (see this piece in Forbes) in the White House.  He's also smiling as the United Kingdom approaches the Brexit cliff and chided Theresa May to NOT hold a second referendum to avoid economic catastrophe - something that Putin sought when Russia played a major role in stoking pro-Brexit frenzy in the UK before the ill-fated vote in 2016.  Meanwhile, the knuckle draggers in Trump's base are too blinded by their hate of others and overt racism to see that they are cheering on perhaps the worse traitors in American history.  On top of all of this, Virginia governor Ralph Northam - a neurosurgeon - described Trump as mentally ill.  Be very afraid for where the nation is headed.  A piece in the Washington Post looks at the looming crisis facing the United States due to the Trump goaded on by Fox News where to be an anchor one must (i) have a lobotomy or (ii) be a raging white supremacist (think Tucker Carlson).  Here are article highlights:

Trump began Thursday under siege, listening to howls of indignation from conservatives over his border wall and thrusting the government toward a shutdown. He ended it by announcing the exit of the man U.S. allies see as the last guardrail against the president’s erratic behavior: Defense Secretary Jim Mattis, whose resignation letter was a scathing rebuke of Trump’s worldview.

At perhaps the most fragile moment of his presidency — and vulnerable to convulsions on the political right — Trump single-handedly propelled the U.S. government into crisis and sent markets tumbling with his gambits this week to salvage signature campaign promises.

Hawks condemned his sudden decision to withdraw U.S. troops from Syria. Conservatives called him a “gutless president” and questioned whether he would ever build a wall. Political friends began privately questioning whether Trump needed to be reined in. . . . And officials said Thursday that Trump is preparing to send thousands of troops home from Afghanistan, as well.

Leon Panetta, who served as defense secretary, CIA director and White House chief of staff for Democratic presidents, said, “We’re in a constant state of chaos right now in this country.” He added, “While it may satisfy [Trump’s] need for attention, it’s raising hell with the country.”

Panetta said the resignation of Mattis is a singular moment and that his letter, which underscores how Mattis sees Trump’s approach as misguided, “puts the security of the nation right now at some degree of risk.”

Trump has been isolated in bunker mode in recent weeks as political and personal crises mount, according to interviews with 27 current and former White House officials, Republican lawmakers, and outside advisers to the president, some of whom spoke on the condition of anonymity to offer candid assessments.“There’s going to be an intervention,” one former senior administration official said speculatively. “Jim Mattis just sent a shot across the bow. He’s the most credible member of the administration by five grades of magnitude. He’s the steady, safe set of hands. And this letter is brutal. He quit because of the madness.”

On Thursday, as criticism over his capitulation on the wall grew louder by the hour, Trump complained to friends and aides that he felt politically shackled. He had no plan but was spoiling for a fight. By midday, the president picked one.

“I’ve made my position very clear: Any measure that funds the government must include border security. Has to,” Trump said Thursday. He added that he had “no choice” but to act.

Trump’s advisers acknowledged that the funding may not be secured in the end but boasted that the spectacle would be remembered favorably by his base voters as proof of his mettle.

[O]n Fox News Channel and across conservative media, there was a brewing rebellion. Prominent voices urged Trump to hold firm on his wall money and warned that caving would jeopardize his reelection.

Rush Limbaugh dismissed the compromise bill on his radio program as “Trump gets nothing and the Democrats get everything.” Another firebrand, Ann Coulter, published a column titled “Gutless President in Wall-less Country.” Trump even found resistance on the couch of his favorite show, “Fox & Friends,” where reliable Trump-boosting host Brian Kilmeade chided him on the air Thursday.

“One of the things he’s most vulnerable to is mockery and mockery by his own supporters,” said Mark Krikorian, a leading anti-immigration activist.  Members of the conservative House Freedom Caucus joined in the rebellion.

The administration drama comes at an especially perilous juncture for Trump, following his thumping at the polls in November’s midterm elections. Democrats are preparing to take control of the House in January and to use their subpoena power to investigate Trump’s finances and conduct in office, as well as alleged corruption in the administration.

Meanwhile, Republicans, in their last gasp of unified government, are divided. . . . . Inside the Oval Office on Thursday, Trump was in what one Republican close to the White House described as “a tailspin,” acting “totally irrationally” and “flipping out” over criticisms in the media.

Even as aides argued to him that protesting over wall funding could deprive government workers of paychecks over Christmas, Trump warned in private conversations with Republican lawmakers that they all would get “crushed” if they did not get the wall built.

If Republicans get "crushed" it will not be due to the wall funding but rather because they were cowardly political whores who failed to put the interests of the country first.  As for Trump, who doesn't read or know history, someone needs to slip him a brief summary of what happened to an equally unhinged Nicolae Ceaușescu in 1989.
Posted by Michael-in-Norfolk at Friday, December 21, 2018

Neither Cheeto nor the repugs will ever recognize they played right into Vlad’s hands. He was also instrumental in the Brexit debacle. People en masses can be pretty stupid.