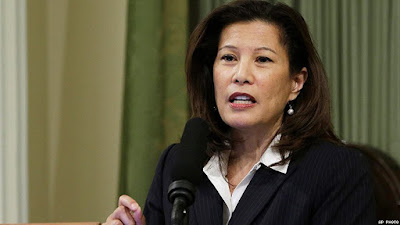 The exodus of sane and decent people from the Republican Party continues.  The latest refugee?  The chief justice of the California Supreme Court, a Republican appointee.  Here reasons were numerous and include the confirmation of the unfit Brett Kavanaugh to the U.S. Supreme Court by Senate Republicans and the racist policies of the Trump/Pence regime.  A piece in The Advocate looks at this latest defection from the GOP.  Here are excerpts:


California's chief justice, who was appointed by Republican former governor Arnold Schwarzenegger — made a stunning announcement on Thursday, saying she left the GOP.

Cantil-Sakauye told CALmatters that the confirmation hearings of Supreme Court justice Brett Kavanaugh were her breaking point. She doesn't say whether it was the accusations that Kavanaugh tried to rape a teenage girl or his unprofessional, partisan responses to senators, instead remarking, "You can draw your own conclusions."

Only the second woman to serve as California's chief justice, and the first Filipina-American in the role, Cantil-Sakauye said, "I felt compelled to make a choice now. It better suits what I do and how I approach issues." She said her family and friends told her, "you didn't leave the party. The party left you."

Cantil-Sakauye wrote a letter last year to then-Attorney General Jeff Sessions and then-Homeland Security Secretary John Kelly, condeming the "stalking of undocumented immigrants" to jail them at courthouses. The justice warned the Trump officials that their policy would deter immigrants from reporting crimes, calling the policy "neither safe nor fair." Kelly and Sessions refused to deter their hard-line practice and told her California's immigration policies "threaten public safety."

The justice is the latest Republican to jump ship from the party, which is near collapse in California — Republicans make up less than a quarter of the electorate and GOP politicians in the state suffered a wipe-out in the midterm election. The GOP's troubles aren't exclusive to California; a state Senator in Kansas just announced she was also abandoning the party of Trump.