Have Americans Finally Had Enough of Trump 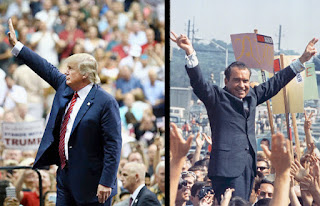 One thing often missing from the political narrative is the reality that less than 30% of eligible voters voted for Donald Trump. The man lost the popular vote and never had any mandate despite his - and the GOP's - delusions to the contrary.  The 2018 midterm elections for the House of Representatives with a flip of 40 seats to Democrats showed the broad revulsion toward  Trump.  Some will try to point to GOP gains in the Senate to argue against this reality, but look at the states where the GOP wins occurred: all are increasing backwater states that are being left behind in the new economy.  On top of that, the 2020 map for the GOP in the Senate elections will be far less favorable that was the case in 2018. If the economy continues to stall as many see happening and moves to recession, the bloodbath for the GOP could be horrific. Thus, the question becomes one of whether the majority of Americans have reached the point where they have had enough of Trump - and hopefully Pence as well - and the pressure will grow to see him removed from office.  A column in the Washington Post by a former Republican looks at this question.  Here are column excerpts:

Trump may have misread — if was reading at all — the vast majority of Americans' patience for an hysterical, chaos-creating and non-functioning president. What in the past worked to delight his audience and throw mainstream media off balance (e.g., a new scandal to replace an old one, vicious personal attacks on opponents and the press, new stock market highs) no longer works to keep his leaky ship of state afloat. Shutting down the government, rewarding Russia and Iran in the Middle East, losing Defense Secretary Jim Mattis and sending the markets reeling may have moved us to a tipping point, the moment when lawmakers and voters decide Trump is far more trouble than he’s worth.Once the realization hits that he’s a net drag on the economy and a needless headache, the country is collectively far more willing to consider grounds for getting rid of him.Coming at a time of maximum chaos (perhaps what precipitated the chaos overload) are significant legal developments — Michael Cohen pleading guilty to a crime Trump directed, Michael Flynn getting bashed for a favorite conspiracy theory of the kooky right, jettisoning a foundation that state authorities identified as akin to an illegal slush fund, and the revelation that Paul Manafort continued to communicate with the White House and lie in violation of his plea deal. After more than 7,000 lies, Trump’s habitual dishonesty is now a given — and his excuses and accusations now habitually ignored by most Americans.As a result of the chaos, the legal quicksand and the lies, Trump faces a country willing to accept that their president is, as Richard Nixon put it, a crook.Let me suggest the American public is moving toward two disturbing conclusions: The president is a menace, and the president likely broke the law. What’s the implication of all that? First, his chances of reelection are sinking fast. It’s one thing to resist impeachment; it’s another to sign up for four more years of turmoil with a liar and miscreant. Republicans had better start looking for options for 2020.
Second, the public, I’d suggest, is far more likely to accept at face value special counsel Robert S. Mueller III’s report findings. If they already suspect Trump ordered illegal payments or obstructed justice, Mueller’s report will likely solidify that view beyond the confines of the Trump cult (which shrinks as his performance worsens).
Third, impeachment becomes less akin to a risky option and more like a constitutional obligation compelled by events.

Fourth, watching the turn in public opinion and the meltdown in the executive branch (especially the loss of the only trustworthy national security adviser), more senators will begin to consider seriously removing Trump from office.
And finally, as we have previously discussed, the option of indicting him and/or his business organization becomes only a question of timing (now or after he leaves office).In sum, the ground shifted substantially over the last week or so. The cracks in his Republican wall of support are widening as actual fear grips Republican officeholders; the public becomes far more willing — anxious even — to see him go. Whether all that will result in his departure from office before 2020 is unknown, but it no longer seems like a pipe dream.