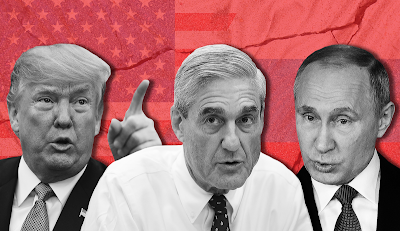 In the wake of a Senate report yesterday that looked at the pervasive and broad scale efforts of Russia to influence the 2016 presidential election, yet another Senate report reveals similar efforts by Russian agents to attack and discredit  Robert Mueller and the Russiagate investigation. Further, as in the presidential contest, numerous Americans all too willing to support Trump because he (and the Russians) have played to their prejudices have re-posted and bought into lies that track directly to enemies of the United States. The other disturbing aspect of the report is how the various social media platforms did far too little, too late to stop Russian efforts.  Seemingly, money and outwardly expanding usage of their platforms was far more important than protecting users from manipulation and stopping subversion of the nation's election system. A long piece in the Washington Post looks at how Mueller was targeted to the delight of the Fox News viewing segment of the public.  The unanswered question is one of how much the Trump/Pence regime has coordinated with the Russian effort.  Here are highlights:

Months after President Trump took office, Russia’s disinformation teams trained their sights on a new target: special counsel Robert S. Mueller III. Having worked to help get Trump into the White House, they now worked to neutralize the biggest threat to his staying there.

The Russian operatives unloaded on Mueller through fake accounts on Facebook, Twitter and beyond, falsely claiming that the former FBI director was corrupt and that the allegations of Russian interference in the 2016 election were crackpot conspiracies. One post on Instagram — which emerged as an especially potent weapon in the Russian social media arsenal — claimed that Mueller had worked in the past with “radical Islamic groups.”

One of the reports, written by Oxford University’s Computational Propaganda Project and network analysis firm Graphika, became public when The Washington Post obtained it and published its highlights Sunday. The other report was by social media research firm New Knowledge, Columbia University and Canfield Research.

Together the reports describe the Russian campaign with sweep and detail not before available. The researchers analyzed more than 10 million posts and messages on every major social media platform to understand how the Russians used American technology to build a sprawling online disinformation machine, with each piece playing a designated role while supporting the others with links and other connections.

Twitter hit political and journalistic elites. Facebook and its advertising targeting tools divided the electorate into demographic and ideological segments ripe for manipulation, with particular focus on energizing conservatives and suppressing African Americans, who traditionally are more likely to vote for Democrats.

One unexpected star of the new reports Monday was Facebook’s photo-sharing subsidiary Instagram. Over the years of the disinformation campaign, Instagram generated responses on a scale beyond any of the others — with 187 million comments, likes and other user reactions, more than Twitter and Facebook combined. . . . . Instagram’s use by the Russian teams more than doubled in the first six months after Trump’s election, the researchers found. It also offered access to a younger demographic and provided easy likes in a simple, engaging format.

On Monday, the NAACP called for a week-long boycott of Facebook starting Tuesday, saying the company’s business practices — and the spread of “disingenuous portrayals of the African American community” on its site — should prompt further congressional investigation.

The emergence of Mueller as a significant target also highlights the adaptability of the Russian campaign. He was appointed in May 2017 as special counsel to investigate allegations of Russian influence on the Trump campaign. In that role, he has indicted on criminal charges a Kremlin-linked troll farm called the Internet Research Agency and others affiliated with the disinformation campaign.

A Clemson University research team, not affiliated with either of the reports released Monday, found that the Russians tweeted about Mueller more than 5,000 times, including retweets first posted by others. Some called for his firing, while others mocked him as incompetent and still others campaigned for the end of his “entire fake investigation.”

The report by New Knowledge highlighted the focus on Mueller and fired FBI director James B. Comey, who was falsely portrayed as “a dirty cop.”

On Capitol Hill, top Democrats said Monday that the revelations in the pair of Senate reports underscored the need to study social media and consider fresh regulation in order to stop Russia and other foreign actors from manipulating American democracy in future elections.

In particular, Schiff described the Instagram revelations as “surprising,” contradicting the data and testimony Facebook previously provided to the committee. “If Facebook was unaware of it, it’s one problem,” he said. “If they were aware of it and didn’t share that information, that’s a completely different problem.”

Sen. Richard Burr (R-N.C.), the chairman of the committee that asked the researchers to analyze the tech companies’ data, said the findings show “how aggressively Russia sought to divide Americans by race, religion and ideology.”

Sadly, far too many of my Republican "friends" took the Russian bait hook, line and sinker as they retweeted and re-posted Russian derived lies, never bother to check out the truth of the wild claims.
Posted by Michael-in-Norfolk at Tuesday, December 18, 2018

It’s not surprising the rusky stench is all over. Mueller scared them once he started digging. They know Cheeto is up to his neck in Kompromat.